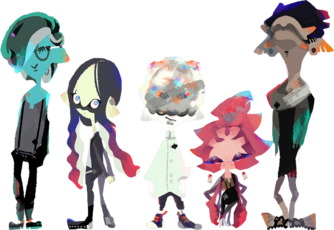 Artwork from Splatoon 2. From left to right: Keaton, Ryley, Mizo, Candi, and Neil.

Wet Floor is a five-piece band appearing in Splatoon 2.

Keaton is an Inkling that plays synthesizer for the band. According to the HaikaraWalker art book, he founded the band using social networking services. He does not like performing live, rather spending time in the studio.

Mizo is the male Inkling on guitar and vocals, and he is a fan of vintage rock sounds, as well as jazz and soul music. He considers himself a rival to the Squid Squad, particularly Ichiya, though he fails to escape their influence. He is responsible for the band's composition alongside Ryley. He is shrewd, cynical, and often makes cutting remarks, and his personal creed is to either exceed or betray the expectations of others.

Ryley is the female Inkling on guitar and vocals, and she plays with a hunky, bass-heavy sound. She is inspired by punk rock, particularly the Squid Squad, and shares a role composing the band's music with Mizo, oftentimes disagreeing with him, though they often complement each others' styles once they come together.

Neil is the band's bassist, and he is a cutthroat eel. He is a self-paced, "big brother" personality for the rest of the band, and builds a thrilling rhythm team with Candi. He has a trademark string-slapping style and usually is able to play his part after listening to it only once, or from a quick look at the score. He is the only member of the band who works well in the mornings.

Candi is the band's drummer and a candy crab. She is youthful and technical, and while she appears spontaneous and right-brained, she often worries about her performance when listening to recordings, though she never shows it. She enjoys watching Mizo and Ryley bicker while having fun as she sits behind them. 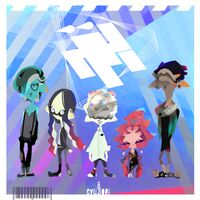 Neil and Candi's names are references to their respective species.