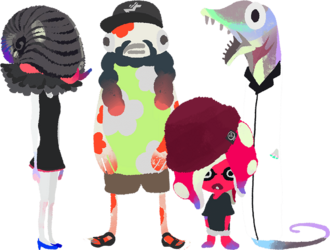 KARLA is the band's bassist. They are a scaly-foot gastropod and are quite silent, rarely talking even in interviews. Prior to joining this band, they were part of a now disbanded band that utilized noisy death-metal vocals, which they were able to withstand thanks to their ironclad body. Much about their life is unknown, including their age, and whether or not they eat anything. However, it is stated that they do not appear to have bad intentions.[3]

DJ Paul is the band's DJ. He is a ten-year old Octoling, and his favorite foods are kelp and biscuits. He remixes from sources including DJ Real Sole, DJ Octavio, and various ancient records, and is surprisingly talented for his age.[3] According to the Japanese Fam vs. Friend dialogue, he is friends with Marina.

Ryū-Chang is the band's drummer. They are a koi carp and come from the base of Mount Nantai in an area with a mountain stream. They are 35 years old and grew up in a prestigious home, but went hardcore during their teenage years, dedicating themselves to punk rock. They enjoy illustration as a hobby, and designed the band's mascot. They play Rainmaker on a team with Kuze and Blow Bottom.[3]

Taichi Sawaberu is the band's guitarist. They are a largehead hairtail, and come from an instrumental background, though they formed the band when they wished to incorporate accompanied singing. They had a negative opinion of DJ Paul when he initially joined the band, considering him tiny and awful, but recently they have changed their mind. They are a prestigious studio musician, and they participate in many activities outside the band.[3]