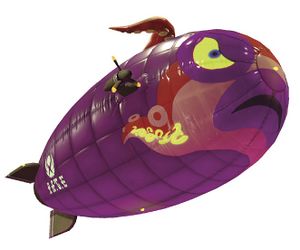 Octozeppelins are Octarian enemies that appear in Octo Canyon, the Octo Expansion, and Return of the Mammalians. They are large purple zeppelins that have Octarian faces sewn on the front and an exposed tentacle at the top, which is their only weak point. Hitting them with ink anywhere except the tentacle is ineffective, but hitting the tentacle can splat them. At the back of the Octozeppelin is a Sprinkler-like exhaust that spreads ink as it slowly flies forward. Some Octozeppelins rotate as they fly, making it harder to shoot their tentacle. They explode in ink immediately upon colliding with any solid object, including the player. Similarly to Octomissiles, they spawn indefinitely from large, circular, shuttered hangars.

Some Octozeppelins in Return of the Mammalians have platforms attached to either side of them that the player can stand on, allowing the Octozeppelins to be ridden.