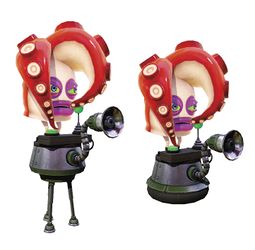 Twintacle Octotroopers are a variety of Octotroopers in Octo Valley, Octo Canyon, the Octo Expansion, and Return of the Mammalians. Unlike regular Octotroopers, their body consists of two tentacles, and fire rapid-fire bursts of ink at the player when spotted. In addition, Twintacle Octotroopers use their second tentacle to move their vehicle around, which can be trapped in the player's ink, slowing them down. They also have a shielded variant, as well as a diver variant.

Unlike normal Octotroopers who spit out blobs of ink, their assault contraptions have a green button, operated by their second tentacle. Once pressed, it rapidly fires out several shots of ink.