Return of the Mammalians (mission)

Return of the Mammalians
It's About to Get Hairy!​

Return of the Mammalians
It's About to Get Hairy! 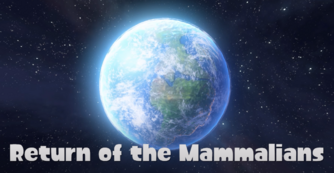 After having three of his Fuzzballs splatted, Mr. Grizz absorbs all the Fuzzy Ooze on the rocket and grows into a ginormous size, knocking Agent 3 and Smallfry away in the process. They are saved by DJ Octavio in his modified Octobot King L3.Gs. Smallfry then transforms into Hugefry, and will battle Mr. Grizz while Agent 3 and DJ Octavio vacuum up four Fuzzballs on Mr. Grizz's body.

Note: Due to the level having no fee, you may retry as many times as you want. However, this "stage" has no checkpoints.

Agent 3 will need to pilot the Octobot L3.Gs and use the Ink Vac to suck in four Fuzzballs on Mr. Grizz's body, before firing the ooze back at him under 3 minutes and 33 seconds.

It's possible to get hit by the fake Fuzzballs or Mr. Grizz or Hugefry while fighting Octarian enemies, as the player cannot pilot the Octobot while fighting. Repeatedly getting hit will not cause Agent 3 to get splatted or impact their health, but will severely hinder the progress of sucking in the real Fuzzballs.

Once all Fuzzballs are sucked up, DJ Octavio will reverse the effect of the Ink Vac, allowing Agent 3 to send back the Fuzzballs at Mr. Grizz, defeating him.

If the player fails during this phase by either getting splatted by the enemies or running out of time, a cutscene of the Earth being covered in Fuzzy Ooze, and the Inklings and Octolings turning into fuzzy creatures as O.R.C.A. reports that the Earth has turned into a giant Fuzzball, will be shown before the usual "Continue?" screen shows up. Mr. Grizz can also be heard laughing while the cutscene plays as the screen turns white. A hollow siren-reminiscent cover of some song plays over this.

For a list of quotes during the mission, see Return of the Mammalians (mission)/Quotes.