Sink into the Ink and SWIM!

Sink into the Ink and SWIM!​

Sink into the Ink and SWIM! 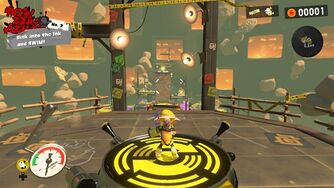 Sink into the Ink and SWIM! is the 2nd level in Splatoon 3's story mode, Return of the Mammalians. 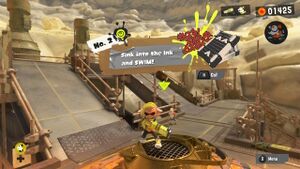 The location of the second Kettle in The Crater.

Accessing the second level is yet again a straightforward process, as the player has to simply continue walking down the corridors until their path is blocked once more by more Fuzzy Ooze. Then they simply have to go to the right and will find the kettle. 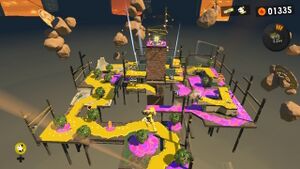 A good view of the second level.

The level starts off with the player going to a Launchpad. After landing, they will see a path of their own ink alongside a trail of Power Eggs and enemy ink on the sides. The player can swim through the ink and easily collect the Power Eggs and jump through some additional Squid Rings. The path will split at certain points, however, both lead to the same destination. The player will soon stumble upon Dash tracks which can be used to quickly jump over large gaps. If the player does fall down, they can be attacked by a patroling Blobby Octotrooper but can easily get back up. 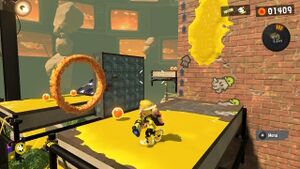 The wall leading to the goal.

The final section begins with another dash track which leads to a tower. The player has to climb their way up the tower with the help of multiple dash tracks, however, at one point they will be forced to manually jump over two slight gaps. At these gaps, the player will notice that there is an ink trail on the wall. If the player ignores the wall and jumps towards the next dash tracks, they will be brought back to an earlier part of the tower. If the player decides to climb the wall up they will be confronted with another Blobby Octotrooper and the Zapfish. Then they simply have to pop the barrier and finish the level.