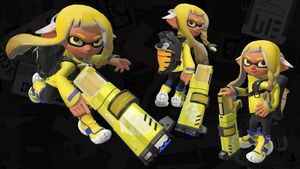 For the outfits worn in Splatoon and Splatoon 2, as well as the clothing worn in Return of the Mammalians missions that do not use the Hero Gear, see Hero Suit.

The Hero Gear is the set of equipment used by Agent 3 while exploring Alterna, and is also present as a weapon option for golden kettles.

While exploring Alterna, the player's Splashdown is replaced with a unique ability that powers up Smallfry with Power Eggs, allowing the player to throw them at a Fuzzball to clean it up. This ability does not need to be charged and there is no limit on its use, although it will fail if the player does not have enough Power Eggs to clean the targeted Fuzzball. A variant of this Special is used during Rocket Battle, requiring Golden Eggs to activate instead.

A loadout selected from your own Hero Gear.

The icon for an Upgrade Point.

The player can use Upgrade Points to purchase upgrades that provide bonuses to Agent 3 and Smallfry while the Hero Gear is equipped, as well as the ability to use Splat Bombs, Burst Bombs and Curling Bombs. If more than one type of sub weapon is unlocked (including Smallfry), the player can switch between them at will using .

Most upgrades must be unlocked using Sardinium before they can be purchased. A maximum of 99 Upgrade Points can be earned, which is exactly enough to purchase every possible upgrade when paired with the 27 pieces of Sardinium available in Alterna. The player can reset the Hero Gear at any time, relocking all upgrades and refunding all spent Upgrade Points and Sardinium. Upgrade Points are earned by inking the ground, using Smallfry to clear Fuzzy Ooze, and finding items throughout Alterna.

Upgrades have no effect while the player is not equipped with the Hero Gear. The Hero Gear Upgrading screen after all Upgrades are unlocked as it appears for Octoling Agent 3.

The first block of upgrades are locked behind a 1 Sardinium Lock, granting access to Smallfry HP Up, allowing Smallfry to take more damage from enemies. And the first Special Charge Up, making Splashdown charge faster.

The second block of upgrades are locked behind a 1 Sardinium Lock, granting access to the first Ink Resistance Up, increasing Mobility in Enemy Ink and Reducing the Damage Acquired over time. The first Hero Shot upgrade, increasing it's fire rate and changing it's model to the second version. And the first Ink-Tank Capacity Up, increasing the amount of Ink in your Ink-Tank.

The fourth block of upgrades are locked behind a 4 Sardinium Lock, granting access to both Curling and Burst Bombs along with their respective upgrade nodes, and the second Hero Shot upgrade, restoring it to it's original strength from The Crater if both Hero Shot upgrades have been acquired.