The Hero Shot is a shooter in the Splatoon series that is exclusively used in single-player modes.

In Splatoon, the Hero Shot is a futuristic weapon with a black and lime green color scheme and many glowing lights that leave a small trail as Agent 3 moves. The ink tank above the gun barrel has a similar style to paintball ammunition bottle. In Splatoon 2, it is based on the real-life FN P90 but yellow. The design that bears little resemblance to the Hero Shot in Splatoon or the Splattershot.

The Hero Shot is used exclusively in the Octo Valley single-player and the Inkling Squid amiibo challenges. It behaves similarly to the Splattershot, with decent range, accuracy, fire rate, and damage. It is the only weapon in the game with multiple switchable sub weapons, using Splat Bombs, Burst Bombs and Seekers, but only the Splat Bombs are usable during the amiibo challenges. Its fire rate can be upgraded with Power Eggs found in Octo Valley missions. Beating the final amiibo challenge unlocks the Hero Shot Replica for purchase at Ammo Knights.

Note: These upgrades have no effect during the amiibo challenges. 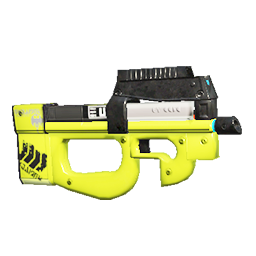 The Hero Shot was redesigned for Splatoon 2 and now comes with switchable sub weapons of Splat Bombs, Curling Bombs and Autobombs, although every other Hero weapon also has these. It is now only upgradable twice, while the other Hero weapons can be upgraded just once. Completing all missions in Octo Canyon with this weapon unlocks the Hero Shot Replica for purchase from Ammo Knights. Unlike in Splatoon, with no upgrades it has a fire rate similar to the .96 Gal.

In Splatoon 3, the Hero Shot returns as Agent 3's primary weapon in Return of the Mammalians. Similarly to previous games, it can be upgraded up to twice as part of the Hero Gear, changing its appearance, damage, and rate of fire. Its ink tank capacity can also be upgraded separately. It is equipped with four unlockable, switchable sub weapons (the most of any weapon), namely Smallfry, Splat Bombs, Burst Bombs and Curling Bombs.

The Hero Shot Replica is a reward in the Splatoon series unlocked through various means. It is a shooter-type main weapon and is visually identical to the Hero Shot. Despite its unique appearance, it is simply a reskin of the Splattershot from each game, sharing the same stats, loadout, sub weapon and special weapon, and upgrade purchases through the Ammo Knights Enhancifier do not affect it.