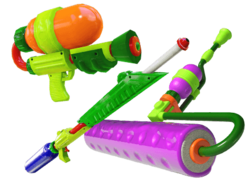 The main weapon is the primary type of weapon players use in the Splatoon series. Each main weapon has its own set of sub weapons and special weapons.

The Splattershot in action.

Shooters are guns that fire small blobs of ink in quick succession. Most shooters continuously fire when the player holds the trigger, but some shooters offer semi-automatic functionality, requiring the player to tap the trigger repeatedly instead of holding it for some or all aspects of operation.

Rollers can be pushed along the ground, leaving a trail of ink. Users can attack by flinging ink and damage is also dealt if enemies come into contact with the weapon while it is being pushed, sometimes crushing the opponent in one hit. As of Splatoon 2, rollers can do a vertical swing when the player is in mid-air.

Firing a shot from the Custom E-liter 4K.

Brellas are shotgun-like weapons with deployable shields. Depending on the brella model, the shield can be held in front of the user or launched forward. Brellas can also fire while the brella is opened giving the user a shield like cover, but the cover can usually be extinguished by some Sub Weapons. This weapon class was introduced in Splatoon 2. 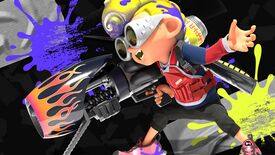 Blasters are weapons that commonly fire large globs of ink with a delayed explosion. Often these explosions aren't the best for inking turf, but better for splatting opponents, for example, the explosion allows users to attack opponents located behind obstacles, around corners, or while on lower ground.

Brushes can be pushed along the ground, much like rollers. They are especially fast but leave a narrow trail of ink. They do not deal nearly as much contact damage, making crushing enemies virtually impossible. However, instead of flinging large waves of ink, brushes quickly swipe from side to side, flicking many smaller globs. This rapid-fire flick is their primary means of spreading ink and attacking enemies, making them ideal for fast, close-combat action. 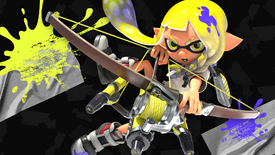 Stringers are large bow weapons that fire similar to a charger. They have a vertical and horizontal shot, similar to the Rollers. The weapon class was introduced in Splatoon 3. 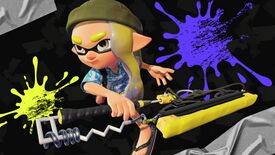 is held, it will charge a more powerful vertical swing. The shots will travel in the air for some time, splashing ink beneath it. The weapon class was introduced in Splatoon 3.