The REEF-LUX 450 appears to be based on a knot assist, a tool used for fishing, and a reflex bow. The bottle at the tip also shares similarities to a yakult bottle. 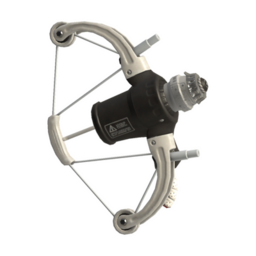 The REEF-LUX 450 was first shown in a Salmon Run gameplay video[1] before being officially announced or seen in-game. Compared to the Tri-Stringer, it is faster, lightweight, has a shorter range, has non-explosive shots and can hold a full charge for a short while in swim form.

While the weapon image and data for the REEF-LUX 450 could not be found in the files for the Splatoon 3 Splatfest World Premiere, dataminers were able to locate Sheldon's description of the weapon, which also names the sub and special weapons in its kit. It was officially announced on 6 September 2022.[2]

Reaching certain Freshness levels with the REEF-LUX 450 will reward the player with special badges that they can use on their Splashtag.

REEF-LUX is a play on "reflex bow", "reef", and possibly "acid reflux" and "deluxe".