The Custom Goo Tuber is a main weapon in Splatoon 2. It is a Custom-branded version of the Goo Tuber.

This weapon can hold a charge for an exceptionally long time in comparison to other chargers, being able to hold a charge for five seconds as opposed to other chargers which only last one second. This allows players to get to a better vantage point or sneak up on enemies with a full charge. The weapon also bears the ability to store incomplete charges. Its charging time takes slightly longer than a Splat Charger, and the range is slightly shorter. Each fully charged shot consumes 15% of the ink tank, allowing users to fire six shots before needing to refill. 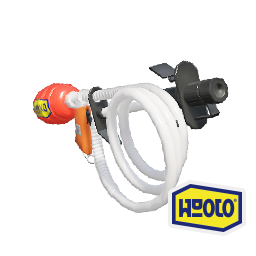