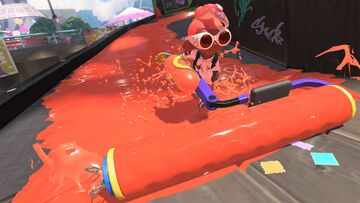 A promotional image for Splatoon 3 featuring an Octoling wielding the Splat Roller, a weapon included in the Roller class.

Rollers are one of the main weapon classifications in the Splatoon series. When the is pressed, the player flings ink from their roller, which can be used for attacking opponents at medium range. If the player keeps holding down the button, the user will hold the roller down, spreading ink on the floor as they run. Rolling into enemies with most rollers will instantly splat them. Since Splatoon 2, all rollers have a vertical swing attack that is triggered by flinging after jumping, which flings longer but more narrow path of ink for long-range attacks or creating a swimming path.

With the Inkling Boy amiibo, the player can use a Roller for Octo Valley missions.

Brushes are roller-like weapons with rapid-but-weaker swing attack (without any long-range attack mode) and faster running speed when "rolling" that leaves a thinner trail of ink. Prior to Splatoon 3, they are classified as rollers. 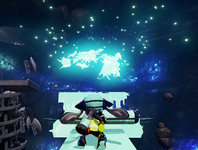 Glowing ink flung from a roller.