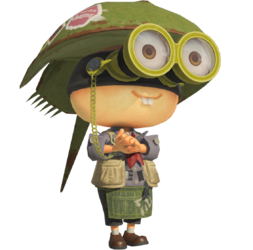 Sheldon is a character in the Splatoon series. He is a horseshoe crab who is the third-generation owner of Ammo Knights[1], a weapons shop in Inkopolis and Splatsville that appears in all three games of the series.

Sheldon is short with a comparitively large head and has brown eyes and buck teeth, and the shell of real-life horseshoe crab on his head, mimicing a soldier helmet. Sheldon wears a military jacket and boots, as well as a red scarf and a red belt. Sheldon also has brass binocular-like goggles that he use as glasses. In Splatoon 2, he wears an apron with badges that look like Cub Scout group badges. In Splatoon 3, he has yellow-green binoculars and a wire ring with a wire attached.

Sheldon is a military fanatic from a well-respected family. He has a great love of weapons, and if the player has unlocked any new weapons, he enthusiastically explains them in great detail. He has developed extreme nearsightedness due to staying up late every night, tinkering with weapons and small parts. He wanted to become a soldier as a child, but couldn't enter due to his poor eyesight. In Splatoon 2, he seems to have improved his skills in creating weapons as he is now able to create new versions of the Hero weapons as well as upgrade them with a machine he made as well. When the Hero Replicas are available to be purchased, instead of saying he could not replicate the technology like in the first game, he says that the weapon could not be mass-produced by "the guys at the factory".

In addition to operating his shop, Sheldon also appears in the singleplayer campaign after being called by Marie after the player beats Into the Octo Oven. He provides weapons he is developing to the New Squidbeak Splatoon to assist their development, and also provides the Ammo Knights Enhancifier. He also joins Marie as advisor to Agent 4 during missions, although he speaks less often than her.

Sheldon can be seen flying the flying Splatfest truck during Tide Goes Out (mission) to transport Marie, and in addition provides the player with the modified Rainmaker during the last phase of the fight.

Sheldon does not appear in Return of the Mammalians, although he does provide the Shel-drone to the player, which can be used to search Alterna for items.

In Chapter 46, Sheldon appears in Ammo Knights in Inkopolis Square, giving Specs his repaired Octobrush. A few moments later, he nominates himself as a judge for the Turf War against Team Blue and Team Glasses at Snapper Canal. In the nature of his attention to detail, he explains the history of Snapper Canal, in which Team Blue has no interest in. He notices Team Blue's strength on the field, specifically Goggles, and later asks Goggles to help him uncover the mysterious treasure that his grandfather left behind.

Having recruited Goggles, Sheldon states that some of the weapons that are used in Turf Wars today were made on Mount Nantai, such as the Hero Shot, Dynamo Roller, and Aerospray. The treasure eventually turns out to be a weapon that resembles the Splattershot but is far more powerful. There is also a note inside, and Sheldon is moved to tears reading it. He insists that he will use the weapon for research and not for Turf Wars.

Sheldon debuts with a brief appearance in Volume 1. He is seen frustrated at Team Blue's silliness when Goggles steals weapons from his shop and wears them. Sheldon later reappears in Volume 12, where he is seen driving Marie's truck in Octo Canyon. Sheldon also introduces two new agents, Agent 4.5 and Agent 4.25, who are revealed as Skull and Vintage.

In the bonus chapter of Volume 12, Grandpappy's Note, Sheldon knocks over a stack of boxes in Ammo Knights, and finds a note from his grandfather. He decides that he wants to go and look for it, and starts to think about who he should take along. He eventually decides on Goggles, and leads into where Chapter 46 left off.

Sheldon's name plays on the word shell. This can refer to both an ammunition shell and the shells of horseshoe crabs.