For the Squid Sisters member with the same name in Italian, see Marie.

Marina Ida is one of two members of Off the Hook, a band featured in Splatoon 2. Along with Pearl, she hosts Inkopolis News, replacing the Squid Sisters from the first game. Her signature color is teal.

She is voiced by Alice Peralta.

Marina is an Octoling, the Octarian version of an Inkling. She has dark brown skin, silvery-teal eyes with reddish-pink pupils in the shape of an infinity symbol (like octopuses in real life), two eyelashes on each eye, very dark teal eyebrows that are constantly downturned in a "worried" expression, and a beauty mark at the left of her lips. She appears to be taller than most Inklings and Octolings. Like Pearl, and unlike other Octolings, her sharp teeth are in the center on both the top and bottom, instead of being asymmetrical. Her tentacles are a dark shade of purplish-brown with teal edges but can change completely to one color. They are long (the longest of all Octolings) and worn down past her waist, and her fingers and toes are pointed and teal at the tips, giving somewhat the impression of painted nails. She has also stated that she has multiple hearts, like how real-life octopuses do.

Her outfit consists of a sleeveless black top covering her chest with a large, mostly unzipped silver zipper with an infinity-shaped hole resembling an 8 and a high collar, leaving her midriff visible, showing a teal navel piercing. She has black shorts with a diagonal waistline and slanted deep teal lines over teal tights, black fingerless gloves, and black boots with big undone silver zippers with 8-shaped holes like the one on her top. She wears large black headphones with teal rings on the sides of them; her ears, which are slightly bigger than those of the average Octoling, are usually covered by these headphones. As seen in Splatfest artwork, she also occasionally wears glasses. During Splatfests, the teal on her design changes to match the color of the team she chose, except for her eyebrows.

In the Octo Expansion, Marina wears a more hip-hop attire than her pop stage outfit, somewhat resembling rapper Tupac Shakur. She wears a white bandana that is wrapped around her head with light gray designs, a long, silver chain necklace with an 8 symbol pendant (similar to her zippers from her stage outfit) around her neck, a black wristwatch and a black chain bracelet on her right arm, a white turtleneck crop top, seafoam colored capris, and silver bowed gray-white shoes. She also retains her headphones. The gear items given out by the Marina amiibo are replicas of Marina's Octo Expansion outfit, namely the Marinated Headphones, Marinated Top, and Marinated Slip-Ons.

As an Octoling warrior, Marina's tentacles were shoulder-length and she wore the Octoling Goggles, Octoling Armor, and Octoling Boots with Elite Octoling seaweed on the sides of her head, first shown in Marina's chat room and again on the back of the Splatoon 2 Live in Makuhari -Tentalive- limited-edition slipcover.

During the Final Fest, she wore a metallic dress with a number eight cut at the chest and very long sleeves that turned into gloves, and matching boots that were higher than the hem of the dress. She also had two diamond shapes painted on her face and a different pair of headphones, with diamond shapes instead of circles.

Marina is more reserved than her bandmate Pearl. She speaks in a sweet, gentle manner, and can get very sassy in response to others teasing her, though she often acts quite shy as well. While she is reserved, she does not appear to be concerned about expressing herself. She seems to be slightly forgetful at times and has been observed to forget the news she and Pearl are broadcasting. Her timidity shows when she sees an Inkling watching her through the window; when she notices them, she smiles awkwardly and waves. This behavior likely comes from the fact that many believe her to be an Inkling even though she learned the Inkling language recently and that she looks very different from the Inklings; her Octoling-like appearance was said to simply be a new fashion trend before Agent 8 came to Inkopolis Square.

Marina has demonstrated a high level of intelligence, noted by Pearl in the Octo Expansion. This is demonstrated with the Shifty Stations, a series of stages created by Marina for Splatfests using advanced Octarian technology, with the mechanics from Octo Canyon appearing in them, as well as floating rocks. She is also capable of hacking Kamabo Corporation, allowing Agent 8 to pass a test using the data collected from their previous attempts, and can hack their CQ-80 device to show her chat room or release a distress signal. In the final battle of the Octo Expansion, she can use her laptop to analyze the NILS Statue in a few seconds, learning about the strength of its cannon and its use of sunlight to charge up power. She can also play a keytar with Squid Sisters and Off the Hook decals on the neck, which she does during live performances of Muck Warfare. Her laptop is decorated similarly.

In Japanese, Marina's speech is occasionally rendered in katakana, indicating an accent of some sort. Unlike DJ Octavio, she does not speak completely in katakana. However, in the Splatune 2 and Octotune liner notes, her lyrics are entirely in katakana, which is supposed to show that her singing is in a different language.[2]

Marina is shown to be an enthusiast regarding all sorts of technology, befitting her background as an 85th generation Octarian combat engineer. She is portrayed as being obsessed with the machinery found in various stages, such as Sturgeon Shipyard, Port Mackerel and the bucketwheel excavator in Piranha Pit. She often utilizes similar machinery in the Shifty Station layouts she designs. She does not like being considered a 'nerd' in this regard. She is very excitable when it comes to machinery. 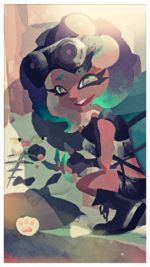 Marina meeting Judd, having just defected from the Octarian army.

Marina was born into "the oppression of Octarian society" as she would later describe it and began to be trained as a combat engineer from a very early age. She graduated from elementary training at the age of 9 after skipping multiple grades and for the next few years went on to play a part in designing the Flooder and enhancing the Great Octoweapons. During the events of Splatoon, she had received multiple commendations as part of DJ Octavio's wasabi supply unit. As a high-ranking member, she was known throughout Octarian society and was recognized by Agent 8 despite them never meeting personally.

During Splatoon, Marina was present wearing Octoling gear in the audience of Agent 3's battle against DJ Octavio but deserted the army and Octarian society shortly after hearing the Squid Sisters sing the Calamari Inkantation. According to witnesses, her only comment was "This changes everything." She escaped to Mount Nantai, where she did not even understand the Inkling language.[3] While there, she met an Inkling named Pearl, who was practicing singing. Learning about Inkling culture and customs, Marina attempted to find Pearl again. When she did, she showed Pearl her musical abilities through her demo of Ebb & Flow and Pearl immediately agreed to them starting a band that they decided to call Off the Hook. They released Ebb & Flow as their first single, which was a hit. By the time of their fourth single, around nine months after the events of Splatoon, they had become popular enough to take over hosting Inkopolis News from the Squid Sisters.

By the time of Splatoon 2, Off the Hook had become famous in Inkopolis Square for their music and for presenting Inkopolis News, in which Marina had a similar relationship with Pearl as Marie had with Callie. Their work included hosting Splatfest events, announcing the themes and singing and dancing to Color Pulse for the event's duration. Across all regions, Marina and Pearl won 29 Splatfests each.

Although Pearl and Marina did not make appearances during Octo Canyon, they were the first to break the news of Callie and the Great Zapfish's disappearances. They also announced their rescue on Inkopolis News, fulfilling a request by "Freshly Fried Boy" to play Fresh Start over the credits.

Marina had a major role in the Octo Expansion, where she and Pearl stumbled upon Cap'n Cuttlefish and Agent 8 by overhearing their radio transmission. Learning that they were trapped in the Deepsea Metro, attempting to escape to Inkopolis, they promised to help them out. The three acted as Agent 8's guides during the tests, while they also talked in Marina's chat room, where Marina was known as "DJ_Hyperfresh". This chat room was used by the group to learn about their respective pasts. When discussing with Cuttlefish about Marina's technological achievements, Pearl finally discovered her history as a member of the Octarian army, and despite being deeply shocked, she promised to remain friends with her.

After Agent 8 collected all four thangs and escaped from the Deepsea Metro, Off the Hook finally met them and Cap'n Cuttlefish in person after their battle with a brainwashed Agent 3, using a fleet of helicopters to carry them away. When the Telephone revealed its true nature as Commander Tartar to destroy Inkopolis, Marina came up with the plan necessary to defeat it - having Agent 8 detonate her prototype hyperbombs to cover the NILS Statue in ink, with Pearl using her Princess Cannon to finish it off. With the threat averted, the group returned safely to Inkopolis Square.

Marina’s first appearance in the manga was chapter 15, where she and Pearl announced the semi-final matches for the Square King Cup. During the same tournament, she, along with Pearl, does the play-by-play report for both the semi-finals and finals.

In the Octo Expansion arc, Marina plays the same role she has in the game, helping Cap’n Cuttlefish, Eight, Team Blue, and Rider out of Deepsea Metro.

See also: Off the Hook

For images of Marina and Pearl together, see Off the Hook/Gallery.

The images' captions are their internal names in the game's news data files. See the category.

"Marina" is a feminine form of "Marinus", from the Latin for "of the sea", and is also derived from the name of a dock for boats. Her surname "Ida" is taken directly from her Japanese name.

"Īda" is a common Japanese surname that also derives from the real-world webfoot octopus, which translates to イイダコ īdako in Japanese. Her Japanese first name "Marine" is taken directly from her English first name, giving her nearly the same full name across English and Japanese. This is also identical in German and similar in Italian.