From Inkipedia, the Splatoon wiki
(Redirected from Brellas)
Jump to navigation Jump to search 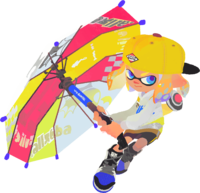 Brellas are a main weapon type introduced in Splatoon 2 and one of the seven main weapon types. Brellas fire a narrow cone-shaped spray of ink each time the trigger is pulled. If the player holds down the trigger, the brella will unfold, providing a protective shield that will absorb enemy attacks. The shield can be broken if enough ink is fired at it. If the player holds down the trigger even longer, the brella will detach from the main weapon and propel itself in the direction it is aimed, inking the ground as it travels. It will still protect anyone behind it from enemy fire until it vanishes, but the shield will be disabled for a short time after it is launched.