A team of four Inklings spawning in Splatoon, with an N-ZAP '85, Splash-o-matic, Blaster and Range Blaster.

The spawn point is the starting area for players in a stage. In multiplayer modes, there are two spawn points on each stage, one for each team. In Octo Valley and Octo Canyon, spawn points are called checkpoints and appear throughout every mission.

A spawn point is a large, metallic device with a flat surface on top filled with the ink of the team it belongs to, the surface of which perpetually rippling. When a splatted player's ghost enters a spawn point, ink bubbles up and creates a new body for them. 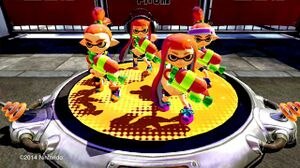 Four orange Inklings on a spawn point at Urchin Underpass.

In Splatoon, there are three antenna-like fixtures on the outside edge that glow with a pulsing, rotating light of the color of the team's ink. The light takes the form of two rotating arrows, the same design as the lives counter in Octo Valley. While an Inkling is respawning, the design rotates faster.

In Octo Valley, the start of every level has a full-sized spawn point. Further checkpoints are simply miniature versions of their multiplayer counterparts; while normal spawn points fit four players, checkpoints are only made for one player, Agent 3. Checkpoints are shut off at first and are activated when approached by the player, lighting up with the player's ink color. Activating a checkpoint also restores one of the player's lives if any were lost. They do not appear in boss battles, except for the first mission and the final mission.

In Splatoon 2, spawn points are visually similar to the top of a cappuccino machine, with steam spouts and various valves, and have an on-off switch on the back portion. On the top of the spawn point is a black cover with a design made of two arrows surrounding a small circle cut into it, showing the ink below. The same design is repeated in graffiti or lights on "spawn" locations that are not the physical spawn point machines, namely at the starting location in Inkopolis Square and the starting point and checkpoint of Salmon Run stages.

In Octo Canyon, the start of every level has a full-sized spawn point. Further checkpoints are smaller and only have three antennae protruding out of them. They are gray until approached, which activates them and paints them in the player's ink color, showing a "Checkpoint" message at the top of the screen. Reaching the last checkpoint in a level shows a "Final Checkpoint" message instead. Activating a checkpoint also restores one of the player's lives if any were lost.

In the Octo Expansion, spawn points appear only in small pads with three 8-shaped neon lights around them as checkpoints around the stations. Unlike Octo Canyon, these checkpoints do not give back any lives. If Agent 8 runs out of lives, they must pay a fee to restart at the last checkpoint with a full set of lives.

In Splatoon 3, each player has their own spawner drone, rather than having one fixed starting area. The spawner drones continue the cappuccino machine theme of the spawn points in Splatoon 2. Spawner drones are more portable and lightweight and can hover in the air. At the start of the match, all players may aim at any part of the stage near their spawn area and get launched there from the spawner drone.

Regular spawn points can still be seen on Scorch Gorge, but concealed in a tarp and are not usable. In Return of the Mammalians, the spawn points return for the levels in The Crater, but are replaced by Octo Expansion-style spawn points in Alterna.

In a short pre-battle sequence, all players on a team appear at their spawn points in squid or octopus form. They then assume their humanoid form and shake off the remaining ink on them. In Splatoon, players spawn in a diamond formation, while in Splatoon 2, this is changed to a trapezium-like formation so no players are left at the back. When a player is splatted, whether by an opponent or a stage hazard, they reappear on their spawn point after about four seconds and can continue playing. Respawn time can be shortened with Quick Respawn.

A spawn point is also a safe space for all players it belongs to; it is protected by an invisible wall through which no enemies or their attacks can go through, including special weapons. This allows players on the spawn point to splat opponents without being in danger themselves. These features help to combat spawn camping, though a well-coordinated team can still do it by staying in the area outside the spawn point's shield and splatting those who try to leave.

Spawn points can also be Super Jumped to at any time, giving players a way to escape a dangerous situation if no teammates or Squid Beakons are available. However, this leaves the user vulnerable while preparing to jump; it is not recommended if there are opponents in the immediate area.

On top of this, spawn points also act as an inked surface, allowing players to swim in it for healing and refilling their ink tank.