For the sub weapon resembling a balloon, see Burst Bomb. 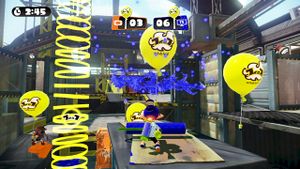 Balloons in the Battle Dojo

Balloons come in a variety of colors, tied to a weighted string that keeps them suspended in mid-air. In the Battle Dojo, balloons are decorated with the Battle Dojo logo. Balloons in the tutorial and the E3 2014 Splatoon demo's tutorial have the Turf War logo, and balloons in Octo Valley have the Octo Valley logo. In Octo Expansion, the balloons' appearances have been changed to resemble foil balloons instead of rubber ones, and have a target on them.

The "fail balloons" in Octo Expansion and Return of the Mammalians are red foil balloons with black duct tape on them that resembles an "X".

Balloons act as targets for testing weapons and the game's controls, as they can be popped by shooting at them with ink. In the Battle Dojo, popping a balloon awards one point normally, and two points during the last minute of the battle. In Octo Valley, balloons often contain Power Eggs, which are automatically collected when they are popped.

In the Octo Expansion, a new type of balloon known as a "fail balloon" is introduced, and it is exclusive to G05 Bustalicious Station. If Agent 8 pops it, the liquid bag on their ink tank will explode, losing them a life. They're tougher than most balloons.