Alterna Space Center: Entrance
Calm yourself, then watch and learn.​

Alterna Space Center: Entrance
Calm yourself, then watch and learn. 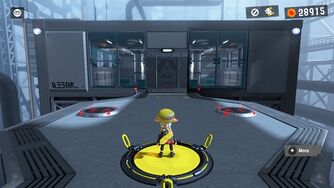 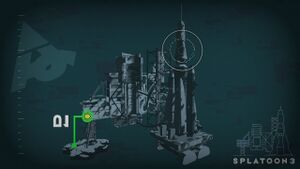 Alterna Space Center: Entrance is the 1st section in the finale leading up to the final boss in Return of the Mammalians.

The player has their Hero Gear confiscated by O.R.C.A. upon entering the section. Because of this, to get to the next section in the Alterna Space Center, the player will need to defeat enemies using only Smallfry. The Player is returned their weapon and gear after making their way through the section.

At the beginning of the section, the player can see two pads in front of them and a closed door further out. While standing on one pad, the player can throw their Smallfry onto the other and that will cause the door to open, furthering progression. The next room requires the player to take out a group of Octarians, either by throwing Smallfry on them or the Balloon Fish in the center to take them out.

Immediately to the right of entering the next room, the player is met with a Flooder blocking the way. Throwing Smallfry onto it will stun it and prevent it from showering ink, allowing the player to pass under it. After making it to the other side and riding the Flooder to another room (with two key vaults visible upon entering), the player should make their way to the next checkpoint, which is located directly to the side of the room's entrance.

While on the propeller lifts and throwing Smallfry onto their propellers, the player will eventually be on top of a structure with a square grate in the middle. Dropping through, the next checkpoint is visible, but blocked by a glass wall. Make your way to another grate platform and drop through, and another one, before being on a floor with two Gushers. Throwing Smallfry on one and going up will take you to a room with a box containing ten Power Eggs, while going up the other one will place you in a room with an Octarian to take out and another Gusher to ride. That will take you to the final checkpoint.

After obtaining the next key, going into the room with the two key vaults and unlocking them will reveal a pad and an ink wheel. Standing on the pad and throwing Smallfry onto the ink wheel will cause it to go up a wall. Then, throwing Smallfry again onto the pad the player was on and making your way up the inked path will lead to a room with two Octocommanders. Taking them out and entering the next room will make an Octosniper spawn behind the player. Splatting that one and unlocking the vault will lead to a terminal to regain your Hero Gear, and an opened air vent to the next section.