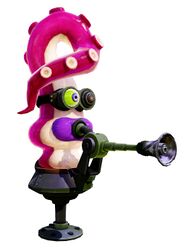 Octosnipers appear much taller than many of their Octarian counterparts. They are stationed on immobile platforms from which they blow shots of ink through instruments that appear similar to a lengthened megaphone. They wear a set of goggles with a laser sight protruding from their left eye. The green laser that comes from the sight reveals where they are looking, and the laser turns red when they spot Agent 3, Agent 4, Agent 8, or another suspicious object. They also appear to possess short, stubby legs, a feature they share with all other Octarians besides Octolings.

Octosnipers are completely immobile unless on a moving platform. They are traditionally situated in higher locations to get a better shot at the player. When an Octosniper spots a player, they will focus their laser sight on the player, charge, and fire a blast similar to that of a fully charged shot from a weapon in the charger category. This creates a trail of purple ink.

It is recommended the player stays behind cover and hide in their ink when confronting an Octosniper, especially in Octo Canyon or the Octo Expansion where they can break the player's armor in one hit. The most effective way of dealing with an Octosniper is to get close to it by swimming slowly through ink or take cover and spray it down before it notices. Sub weapons such as Splat Bombs and Autobombs can also be easily used to splat it given the fact that Octosnipers cannot move and, in turn, cannot run away from a sub weapon. Octosnipers are quite observant and will notice the player if they swim too fast in ink. Octosnipers are very powerful at a distance, but their firing device is too long to reach the player when they are too close. Touching one will cause the player to recoil, but nothing else.