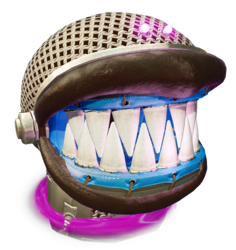 This article is about the character. For the mission by the same name, see The Ravenous Octomaw!.

The Octomaw is the last Great Octoweapon battled in Octo Valley.

The Octomaw is a giant metallic Zapfish-like Octoweapon. Its head appears to be made of wire with its body made of scrap quickly put back together. According to The Art of Splatoon, it has two frog-like feet despite being based on a fish. It has a large fin that pokes out of the ground when swimming towards Agent 3. Its eyes are expressive: they curve to form sad eyes after it fails to eat Agent 3 and they form "X" shapes when a bomb is thrown into its mouth.

The Octomaw was an Octoweapon created during The Great Turf War by the Octarian army. When victory seemed to be upon the Octarians, a plug was pulled and caused the Octomaw and the rest of the Octo Weaponry to shut down. Nearly 100 years later the Octomaw was revived by a Zapfish to charge once again. 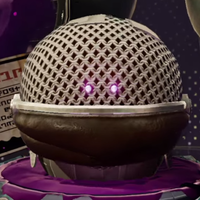 The Octomaw in a pool of Ink.

Agent 3 encounters it inside a Boss Kettle in Sector 4. When it sees Agent 3, it will charge and try to eat them from below. Agent 3 must escape its maw by destroying its teeth surrounding them, which do not regenerate for the rest of the phase. Once the Octomaw pops out completely, Agent 3 can throw a bomb (preferably a Splat Bomb or Burst Bomb) into its mouth to stun it, making it reveal its tentacle which must be splatted. If time passes without Agent 3 throwing a bomb into its mouth or splatting its vulnerable tentacle and it has remaining teeth, the Octomaw will return to its initial position and launches its remaining teeth toward Agent 3 that float midair and fire globes of ink (similar to those fired by Octotroopers). The teeth can still be destroyed in this state and the remaining ones will eventually return to the Octomaw, who will then charge at Agent 3 to eat them again. If it has no teeth, it skips this teeth-launching attack and attempts to eat Agent 3 immediately.

After its tentacle is splatted for the third time, Octomaw will be defeated and blows up, granting Agent 3 its Zapfish.