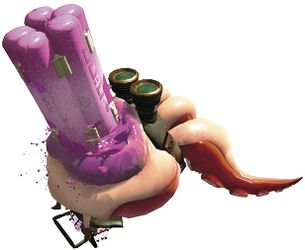 Octohurlers are Octarians that appear in Splatoon 2's single-player modes, Octo Canyon and the Octo Expansion.

Octohurlers are large Octarians that have four tentacles that help toss Rolonium. They also can be seen wearing green goggles and are always sitting on a small stool with what appear to be tiny Rolonium bundles.

Octohurlers spit out Rolonium at players, which can be reflected at them for an instant splat. They are stationary and can occasionally be found on Spreaders.