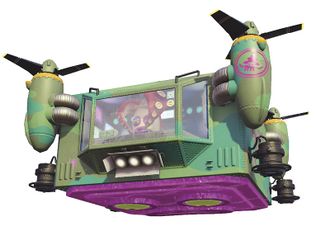 Octoseekers are Octarian enemies that appear in Octo Canyon and the Octo Expansion.

The Octoseeker is a flying machine strongly resembling the Octostomp, made by the Octarians. It is piloted by a Twintacle Octotrooper, who uses a joystick to move the craft and a button to raise and lower it. The front contains a window for the pilot to see out of, which cannot be inked due to being made of glass. The back contains a door and an A/C unit.

Octoseekers are flying enemies and patrol around an area, raining down ink. If they spot the player, they try to fly directly above them before falling to crush them. They then stay on the ground briefly, giving the player time to ink their sides and climb up on top of them. Octoseekers have spotlights attached to them that illuminate the ground; when an Octoseeker is about to fall, its spotlights all converge on the spot where it will fall, and a buzzing noise is produced. After it falls, an imprint of ink shaped like the Octoseeker's face is left behind on the ground (if the surface it landed on is inkable). Getting crushed by an Octoseeker will break the player's armor instantly, and therefore splat them instantly if their armor is already broken. Octoseekers may accidentally crush other Octarians while in pursuit of the player and splat them instantly, and they can also destroy other objects like crates and Bumpers (being the only things that can destroy Bumpers besides Octostamp DXs). Unlike most Octarians, Octoseekers cannot themselves be splatted.