This article is about the character. For the mission by the same name, see Into the Octo Oven.

The Octo Oven is a large oven with several Octarians inside of it. It also has a single glowing eye to watch Agent 4, along with wheels similar to those of a Flooder. In Phase 2, the eye is replaced with a pair of vent hoods that resemble eyes along with an even bigger orange eye above it. There are also three vents coming out from the three back sides. There are stickers on it that appear to be logos for an Octarian bakery. On top of it is a hole out of which its tentacle emerges.

According to The Art of Splatoon 2, the Octo Oven was originally just a bread-baking machine created by an Octarian that knew about bakeries in Inkopolis. The bread had a good reputation and in order to raise the rate, the oven was upgraded to bake more bread at once. Unfortunately, the bakery's owner was seriously injured when the bread ejected itself when done. After this, the Octo Oven was made into a one of the new Octo Bosses to be battled by Agent 4 in Octo Canyon.

The Octo Oven is the first Octo Boss that is fought in Octo Canyon. It will slowly surface from a large puddle of ink, starting the battle. It attempts to hit Agent 4 with one of the "loaves" until it gets fed up and shoots all of them out. This is Agent 4's chance to climb up and splat the tentacle. After this, the giant oven removes several panels, revealing an even bigger eye, three vents, and another pair of purple eyes. It also shoots several "churros" from its top, then continues its regular attack. In the final phase, it grants the bread armor and brings out a glazing machine to attack Agent 4. Once defeated, the "bread" shoots out burnt before exploding. 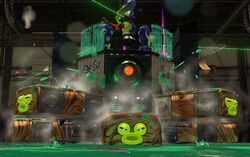 The Octo Oven returns in the Octo Expansion, known as the Octo Oven XXL, where it has been Sanitized and situated in Toastmaster Station. Its battle with Agent 8 is very similar to its last one with Agent 4, where it constantly tries to hit its foe with the "bread". However, it is not alone, as now there are several Octotroopers guarding the weak spot, as well as a canned special. Soon the Octotroopers are replaced with Octobombers, then later Octosnipers and Splash Walls. For all three phases of the fight, Sprinklers are spawned on the oven's inkable walls. After the tentacle has been splatted three times, the "bread" will burn and the oven will once again blow up. It appears to be textured similar to cinnamon bread.