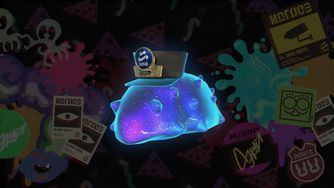 C.Q. Cumber is a name that refers to many individuals[2][3] in the Octo Expansion. They are translucent blue sea cucumbers wearing a train conductor's hat. They are employees of Kamabo Corporation, created for the sole purpose of operating the Deepsea Metro.[2]

They were first shown in the 8 March 2018 Nintendo Direct with one individual explaining the usage of the subway map to Agent 8 and interacting with Cap'n Cuttlefish.[4]

Upon receiving a CQ-80 and a CQ Card from the Telephone, Cap'n Cuttlefish and the newly christened Agent 8 board the Deepsea Metro's train. Once aboard, they meet a C.Q. Cumber, who introduces himself to the duo and adds 1,000 CQ Points to the CQ Card.

At each station, a C.Q. Cumber resides in the starting room where the equipper is located, and if he is spoken to, he instructs Agent 8 of the objective, hazards, and requirements of the upcoming test. If Agent 8 continues to talk to him after he has shared all of his advice, he will tell them to "take care out there", implying that he does care about them at least somewhat. If Agent 8 either fails the test's requirements or does something that precludes the possibility of completing the objective (such causing an 8-Ball to fall off of the stage), then C.Q. Cumber informs them of this before declaring that the test failed and causes the bag on their ink tank to explode with enemy ink, splatting them.

If the player returns to the Deepsea Metro after the defeat of the final boss, C.Q. Cumber mentions that Kamabo Co. has ceased to exist. Despite this, he assures Agent 8 that the Deepsea Metro is still running, allowing Agent 8 to complete any tests that they missed.

After the player reaches a new line, C.Q. Cumber will award the player with 500 C.Q. Points.

Their name is a pun on their species name, "sea cucumber".