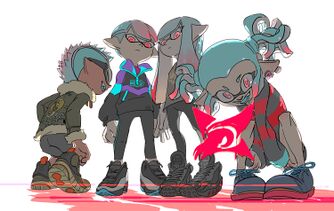 Team X-Blood is a team in the Splatoon (manga). It was formed by Vintage inviting the top-ranked Inklings of the X Rank to when Rank X was newly formed. According to Emperor, Team X-Blood are the Conquerors of Ranked Battle.

Vintage is a character in the Splatoon (manga) with the "Mush-Cut" hairstyle. His choice of legwear is the "Leggings" and wears the Fake Contacts, Takoroka Nylon Vintage, and Orca Hi-Tops. His main weapon is the Ballpoint Splatling, although in the Octo Canyon arc he uses the Hero Splatling Replica.

Omega is a character in the Splatoon Manga with the "Banger" hairstyle. Her choice of legwear is the "Tight black pants" and wears the Fake Contacts, ω-3 Tee, and Toni Kensa Black Hi-Tops. Her main weapon is the Nautilus 47.

Double Egg is a character in the Splatoon (manga) with the "Spiky" hairstyle. His choice of legwear is the "Drawstring cargo pants" and wears the Double Egg Shades, Custom Painted F-3, and Amber Sea Slug Hi-Tops. His main weapon is the Light Tetra Dualies.

Red-Soled is a character in the Splatoon (manga) who has the "Pigtail" hairstyle. Her choice of leg wear is the "Loose Sport Shorts" and she wears the Squid Clip-Ons, Annaki Blue Cuff, and Navy Red-Soled Wingtips. Her main weapon is the Bloblobber.

At first, Vintage is a stubborn person who doesn’t talk much. He doesn’t think anyone else can be Rank X, and he looks down on those with lower ranks. During and after the battle against Team Blue, he becomes a supportive teammate, and realizes that teamwork is just as important as skill.

Omega's personality seems to be a lot like Vintage, even considering she doesn’t talk much and may be shy. She, like her other teammates, becomes more compassionate after the battle with Team Blue.

Double Egg is kind of sassy, yet he is determined to make a move in battle and be proven as worthy of X Rank.

Red-Soled is the sassiest, and silliest of the team. She sometimes acts like Double Egg. Whenever Vintage shows that he cares about, or notices his teammates, she gets surprised.