The Bloblobber is a main weapon in Splatoon 2 and Splatoon 3.

It is a slosher-type weapon that shoots a row of four small bubbles which are able to bounce along the ground and off walls. The weapon boasts fairly long range and is able to splat opponents in a single shot if all four bubbles connect. The bubbles do not suffer from any type of damage decay, doing a consistent 30 damage regardless of range. The distance the bubbles are able to travel varies greatly depending on the amount of obstructions in their way, the bubbles will gradually shrink as they travel before vanishing. Colliding with walls or inclining surfaces will reduce the travel range of the bubble, as well as cause them to shrink faster.

The Bloblobber is a small black bathtub with a white inside. Unlike a traditional bathtub, the Bloblobber has no legs and has extra supports and a handle. It is also small enough to hold. 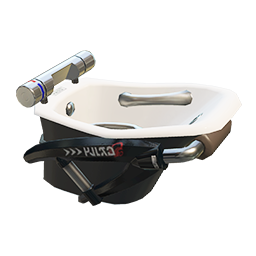 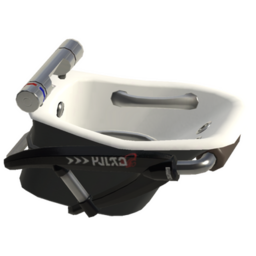 The Bloblobber returns in Splatoon 3, retaining its design from Splatoon 2. Its kit is the Sprinkler and Ink Storm.

It appears in two missions in Alterna:

Reaching certain Freshness levels with the Bloblobber will reward the player with special badges that they can use on their Splashtag.

For competitive tips about the Bloblobber

The Bloblobber is a combination of Blob and Lobber, coming together to mean "One that lobs blobs", referring exactly to what the weapon does, as well as rhyming. The "verb" Bloblob can be separated into two blobs as well.