The Tenta Brella is a main weapon in Splatoon 2 and Splatoon 3.

The Tenta Brella functions similarly to the standard Splat Brella but the shield is much larger. This means it can block more shots and leave a wider ink trail when launched.

The Tenta Brella has a black handle that is shaped like a walking stick. The canopy is rectangular and has two dark green sections and two sections that change color to match the user's ink. In the center of the canopy is a black muzzle that connects to four red bars, each one supporting one of the canopy's corners. Below the muzzle is a white Sorella logo and some white warning labels. 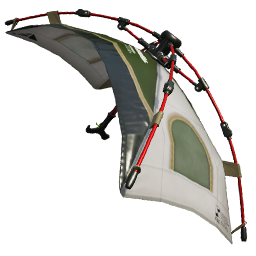 The Tenta Brella was announced during a Nintendo Direct on 13 September 2017. It was released on 30 September 2017 at 02:00 UTC.[1] It comes with Squid Beakons and Bubble Blower.[2] In Salmon Run, the umbrella's shield breaks immediately after making contact with a Steel Eel. 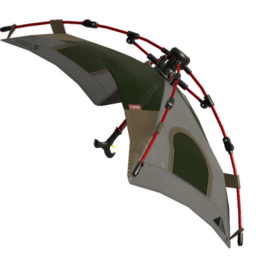 The Tenta Brella returns in Splatoon 3 with Squid Beakon and Ink Vac, looking identical to how it looked in the previous game.

Reaching certain Freshness levels with the Tenta Brella will reward the player with special badges that they can use on their Splashtag.