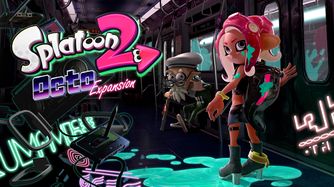 The mode is located at the subway entrance in the alleyway to the upper right of the map. It is also referred to as the Deepsea Metro on the drop-down map.

The player takes the role of Agent 8, an Octoling with amnesia who finds themselves in a strange subway station connected to a series of research facilities deep underground. As the game starts, the Octoling sees Cap'n Cuttlefish ready to attack them before stopping, seeing that they do not have a weapon with them. Cuttlefish then informs the Octoling that they and Agent 3 fought in Octo Valley before "someone" attacked them and caused the Octoling to lose all of their memories in the process. He then asks if they remember anything, which prompts the customization of the player's Octoling. After finding a way through the beginning of the subway, Agent 8 and Cap'n Cuttlefish come across an empty platform with a telephone ringing. As the Octoling answers the Telephone, it identifies them as Applicant No. 10008; deeming the name too long, Cap'n Cuttlefish decides to give them the name "Agent 8" for short. The Telephone tells Agent 8 that they would want to go to the "Promised Land" so they can be free, but to do so, they must collect four "thangs". As the call ends, a train pulls up towards Agent 8 and Cap'n Cuttlefish and stops for them. They then meet C.Q. Cumber, the conductor of the train, who explains the functions of the CQ-80 and the CQ Points system. Shortly afterwards, Pearl and Marina make contact with the two of them and offer their help in escaping.

After collecting all four "thangs", the telephone cryptically asks whether Agent 8 is "ready to ascend to a higher plane of existence" and "willing to become something greater than yourself", before using the thangs to seemingly open a door out of the Metro. It is soon revealed to be a trap, however, Pearl and Marina realize the thangs were parts for a giant blender that the Telephone planned to use to render them into raw material.

Before the blender can turn on, Marina activates a distress signal from Agent 8's CQ-80, prompting Agent 3 to smash through the ceiling and destroy the blender. Agent 3 is knocked out, but Agent 8 can use their employee-model CQ-80 to activate an elevator to the surface. After a lengthy escape, Agent 8 is forced to defeat a partially sanitized Agent 3, who had been attacked while they were escaping. Once on the surface, Pearl and Marina prepare to airlift Cap'n Cuttlefish and Agent 8 to safety, but the above-ground section of the facility proceeds to rise from the ground, now revealed to be part of a human statue. The Telephone introduces itself as Commander Tartar, an AI created 12,000 years ago to pass on human knowledge to any species worthy enough. It reveals that it has judged both Inklings and Octarians as unworthy of receiving its knowledge and begins activating a weapon to destroy and recreate life on Earth, fueled by the raw material of the successful test subjects that it seeks to use to create "perfect" life. Marina, Pearl, and Agent 8 hurriedly put a stop to the statue, using Marina's prototype hyperbombs and the Princess Cannon, powered by Pearl's loud voice. With the world saved and Tartar destroyed, Pearl and Marina hug with Cap'n Cuttlefish celebrating and Agent 3 wakes up. Agent 8 watches and smiles at them, finally able to be free. The group then look out to Inkopolis, Cap'n Cuttlefish presses the CQ-80 and the staff credits play. After the credits begin to finish, Agent 8 looks back at the player and smiles at them. With the world saved, Off the Hook returns to Inkopolis Square, dropping off Agent 8 there as well.

When Agent 8 returns to the Deepsea Metro, C.Q. Cumber tells them that they can now transfer credits into items as well as find mem medals in different Stations that can be used to exchange items in the Vending Machine. Cap'n Cuttlefish informs Agent 8 that Agent 3 went out on patrol and he wished to check on the denizens of the deep for a while longer.

After Agent 8 completes all the tests, a locker in the Central Station will open and Agent 8 will have a battle with their "Inner Agent 3" using the classic ink colors of blue and orange respectively. Defeating them will reward the player with the Golden Toothpick.

The Octo Expansion adds a new single-player campaign consisting of eighty levels. Off the Hook supports Agent 8 from above ground and their help can be used to skip missions that are too difficult.

The first station has the Telephone, where Agent 8 learns the details on how to escape the Deepsea Metro. The Telephone also provides Agent 8 with the CQ-80 device (a flat controller shaped like a submarine), used to navigate the underground; and a CQ Card, which is used to store CQ Points. C.Q. Cumber will issue an initial 1000 CQ Points to start.

Lives are lost not only from being splatted but also by failing to comply with certain test conditions. If the player fails to complete the test's conditions to pass, an inflatable balloon of ink attached to Agent 8's ink tank will explode and splat them in the process.

If the player loses all of their lives, they may continue from the last checkpoint with all lives returned by paying more points, return to the station for free (but still having to pay to re-enter the level), abandon the level and return to the subway, or ask for help from Off the Hook to skip the level. Off the Hook can only help Agent 8 skip a level if they fail at least twice. When prompted to ask for help, it requires the regular fee to auto-pass the level, wherein Marina hacks into Kamabo's mainframe to trick it into thinking Agent 8 passed. The resulting mem cake will be gray, with only the quote "Your guess is as good as mine." However, if pressed to ask for help, the player can press X to "Tough it Out" and continue to play the level as normal. If skipped, the mem cake of that level will not be collected, barring players from certain rewards until they have completed the station properly.

If a player finds themselves with less than 100 CQ Points after losing all of their lives, a game over screen will appear instead of a continue screen. The player will then return to the Metro, where Pearl will take money from her dad and Marina will convert it into CQ points, transferring 3000 CQ Points to Agent 8. However, the player will be in debt, which can be repaid through Cap'n Cuttlefish. Players cannot access the secret boss fight if they have debt.

The normal Octarians from Octo Canyon are replaced with Sanitized Octarians, which are a distinctive shade of sickly green. Enemy Octolings can use more main weapons and special weapons, previously only seen in online multiplayer modes. For example, in the first test, an enemy Octoling can use an Inkjet. A select amount of levels are also special only, meaning Agent 8's special bar never goes down.

Some tests have Agent 8 go against a team of four Sanitized Octolings, in the style of ranked modes. The time limit is always five minutes and Agent 8 has unlimited lives until the time limit ends.

After completing the story, players can play as a male or female Octoling in multiplayer gameplay and customize them just like Inklings. Gear and weapons will be shared between the characters in the same account.

A short gameplay video of one of the missions was published on 30 April 2018. It shows a female Agent 8 on a mission requiring her to defeat a set of Sanitized Octotroopers, Octosnipers and Octocommanders within two minutes. This video also marks the first appearance of canisters similar to the special weapon canisters from Octo Canyon, as well as metallic briefcases. Both are marked with the same logo as the CQ-80 and the CQ Card, unlike the Octo Canyon canisters that show the Ammo Knights logo.

The objectives of the missions were revealed in a short gameplay video of Stamped-Up Station. It is a set of three floating pieces of a goal that must be covered in ink to be activated and be touched for the level to be completed. There are also smaller posts that emit red beacons that function the same as Mini Zapfish.

After three of the thangs are found, Cap'n Cuttlefish will decide to make a "missing" poster for Agent 3, asking Agent 8 what they look like. This determines Agent 3's gender, skin color, and eye color.

During the escape, if Agent 8 dies five times in a phase, their "Skip Charge" will be filled and will be allowed to skip the phase. If so, the sounds of a Splashdown and a Sting Ray can be heard and there will be a simple transitional phrase on the screen, stating that Agent 8 got past the phase. In the final boss, it will be instantly filled after one failed attempt.

When Agent 8 returns to the Deepsea Metro, they will be able to use the vending machine in Central Station to exchange 15,000 credits for an item and go around other stations to claim mem medals to be exchanged for the vending machine. The vending machine has more variety than the Ammo Knights Enhancifier, having the chance of getting more than one drink ticket, upgraded food tickets, cash, ability chunks, and credits. The items range from getting every type of drink ticket to even getting tens of thousands in cash.

Completing all missions with each challenge cleared and defeating the secret boss will change the background of the CQ-80 to one featuring the Kamabo Corporation logo and a stamp with the Inkling text saying "COMPLETE" on the bottom of the map.

There is a mandatory tutorial station, Abandoned Station.

If a station has dual IDs, the later letter in alphabetical order takes precedence, as inferred by the cost of its test fee and the way two lines overlap each other. Stations with double circles denote where thangs are. Line A is the only line that has a station with 00 as its number, Central Station. A04 Roll Out Station

A06 Bounce with Me Station

B15 Ink from Above Station

C04 Move It Move It Station

D01 Ink from Above Station

D05 All That 8-Ball Station

G07 Ride with Me Station

I03 No Whammy Station

I04 Can't Touch This Station

I06 All Eyez Station

I07 Ride with Me Station

Upon completing the Octo Expansion, the player is rewarded with playable Octolings and an Octo Shot Replica to use in online battles.

Purchasing the Octo Expansion unlocks the Studio Octophones and the Octo Layered LS. As soon as the player enters the game and finishes Inkopolis News, a box containing both pieces of gear will be in the center of the Square.

Of all the items listed here, only the Golden Toothpick requires the player to pass all stages without help from Off The Hook.

The full version of the Octo Expansion trailer song, called Nasty Majesty, was performed during Off the Hook's live concert at NicoNico Chokaigi 2018.[4]

On 21 May 2018, a new character was revealed, a Sanitized Octoling DJ called Dedf1sh. According to Nintendo, Dedf1sh was a DJ with a promising future in the music world. During her search for inspiration, she came across a deep-sea testing facility and became disinfected. Despite this, she kept up her career as a DJ, and her music is heard all through the facility.

The Splatoon manga adapted the Octo Expansion into the Octo arc. It lasted from chapters 24 to 28.

In the Octo arc, Goggles wakes up in the Deepsea Metro, after being washed away during his "part-time job". He is greeted by Eight, who saves him from some Sanitized Octarians. He meets up with Cap'n Cuttlefish.