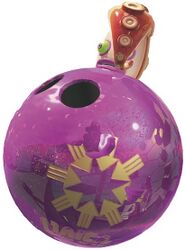 This article is about the Octotroopers inside large bowling balls. For the small, ball-shaped Octarians found in Octo Valley, see Octoball.

Octoballers are Octarians found in Octo Canyon, the Octo Expansion and Return of the Mammalians.

Octoballers are large bowling balls with an Octotrooper inside one of the finger holes. They roll until anything solid gets in the way, or if the player splats the Octarian inside of them using their weapon or a Gusher. They ink a path in a straight line from where they were launched and are usually launched alternating left and right. When splatted, they give no Power Eggs unless they are rare gold Octoballers, which give ten, or Kingpin Octoballers, which give twenty. Despite having the word 'Baller' in their name, Octoballers' balls are designed to resemble bowling balls and have no connection to the Baller special weapon. They are adorned with an emblem on the side, which looks like a circle of arrows pointing to the center of the side of the ball. There also exists a giant version known as a Kingpin Octoballer, which holds two Octotroopers inside of a glass cockpit replacing the holes. They can be splatted only by pushing them off the stage with an extending platform, or if the player uses an Ink Cannon to hit the Octarians inside. The balls are deployed from a bowling alley-style launcher, which makes noise before the Octarian pops its head out of the ball, then the ball starts rolling. The Octarian inside a regular Octoballer ducks its head inside its hole whenever it nears the ground.

Octoballers are fired from cannons and roll on the ground, splatting anything that gets in the way. They can be destroyed by attacking the Octotrooper. Some Octoballers do not leave behind a trail of ink. Kingpin Octoballers move more slowly, but they can only be destroyed with Ink Cannons. Being as wide as the lane they appear on, they are very difficult to avoid. However, it is possible to dodge them by submerging in ink on the very edge of the platform.