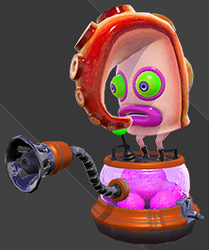 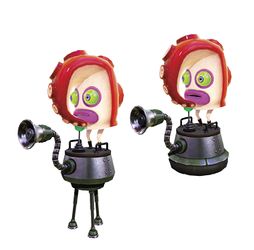 Octotroopers are Octarians riding on small, simple vehicles consisting of a cylindrical platform with a black ring on the bottom, a long hose-like protrusion with a megaphone-like nozzle on the end, and a single joystick on top that the Octarian uses to operate the vehicle. How the 'base' of the vehicle looks varies from game to game; in Splatoon, it is made of a dark, stainless metal, while in Splatoon 2, it seems to be made from an upside-down blue recycling bin. The second variant introduced in Splatoon 2 has a more unique base design instead - a container-like contraption with a red ends, glass sides that reveal several pre-made balls of ink, and more curved sides instead of straight ones - resembling a gumball machine.

Octotroopers serve as the most basic foes featured in both Octo Valley and Octo Canyon, having little health, mobility, basic tactics, and a single attack - periodically firing a slow-moving globe of ink towards Agent 3 or 4 that has limited range but ignores gravity. Under normal circumstances, their simplistic combat skills alongside their placement make them easy targets in any area, as their attacks are easy to dodge and their low health makes them easy to splat upon getting close enough (only two shots from most automatic weapons, such as the Hero Shot or Hero Dualies, will splat them). The only time Octotroopers are a real threat is when they are encountered in large numbers - some packs of them can reach up to a dozen in a single area - in which it is easy for Agent 3 or 4 to be overwhelmed. Additionally, Octotroopers' projectiles do a deceptively large amount of damage on hit, compensating for how easy they are to dodge.

Splatoon 2 introduces a second variety of Octotrooper that rides a differently-designed vehicle than their normal counterpart. These are identical to the normal variant with the sole exception that they fire a two-shot burst of bouncing ink projectiles along the ground instead of a single, slow glob through the air. This makes them more dangerous than the normal version on open stretches of ground, but harmless if there is a gap between them and their target.

Octotroopers appear in the majority of Octo Valley missions, with some notable exceptions: the four main boss levels, the four Octoling levels, and Unavoidable Flying Object. Levels which do contain Octotroopers can have as few as two or more than twenty throughout.