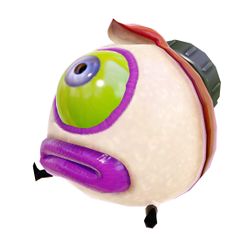 Not to be confused with Octoballer.

Octoballs are Octarian enemies appearing in Octo Valley who possess the ability to spread ink while rolling on smooth surfaces.

Octoballs are small, round Octarians with one large eye and a pair of purple lips. Because of their body shape, they are able to roll on smooth surfaces while leaving behind a thick trail of purple ink. When shot with Inkling ink, they are pushed backwards but not harmed. However, if submerged in a puddle of Agent 3's ink, they will struggle to move and can be splatted.

Octoballs are the only non-boss enemies from Octo Valley that do not return in Splatoon 2's single-player mode Octo Canyon. Despite not appearing in Octo Canyon, concept art of a bowling alley stage that features them prominently can be seen in The Art of Splatoon 2,[1] a role taken up by Octoballers in the final game.

Sanitized Octoballs make a brief appearance in the Octo Expansion. Despite never appearing as enemies in the game, they can be seen trapped in storage units during the Belly Phase as well as inside the liquid lasers of the NILS Statue. When the NILS Statue is destroyed, these Octoballs can be seen flying out of it.

At the end of the fan-made issue of Splatoon, Specs, an Inkling from Team Blue, flies over a group of Octotroopers and Octoballs.