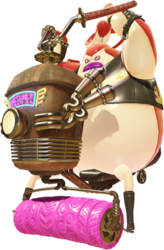 This article is about the character. For the mission by the same name, see Fear the Octo Samurai.

The Octo Samurai is the second Octoboss encountered by Agent 4 in Octo Canyon.

The Octo Samurai resembles an Octobomber but much larger in size and more humanoid. The Octo Samurai has a heavyweight and round body that is similar to that of a sumo wrestler, small eyes, and sports a tentacle on the back of his head in a ponytail. He wears a black leather motorcycle jacket with golden embroidery on the sides and a print of DJ Octavio on the back. He carries a weapon that is similar to a Dynamo Roller that can change positions vertically or horizontally to the handle, and can combine with his unicycle to form a vehicle which Sheldon calls "The Octocycle". The handlebars of the octocycle appear to be made of sword hilts.

The Octo Samurai is an Octarian that was trained to wield his own Great Octoweapon, the Octocycle. His mission was to have a traditional duel against Agent 4 in Suction-Cup Lookout.

The Octo Samurai diligently and strictly trains young Octarians, but he's not very good at sumo. He is also secretly a fan of Callie.[1]

The Octo Samurai is first seen in Suction-Cup Lookout in his own mission. He will rise out of a puddle of ink with its roller and starts the battle. His tactic is to rather splash the roller at the hero or attempt to run them over. If Agent 4 is able to splat him, then the Octocycle opens up to reveal the tentacle for them to splat. After this, the samurai respawns with some new tricks up his sleeve. He will now be able to jump at the Agent with a vertical swing, and can also swing the roller around in a circle. In phase 3, he is able to cause a wave of ink to come straight at Agent 4 from a distance. After the tentacle has been splatted three times, the Octocycle will explode, leaving the splatted Octarian with nowhere to respawn, therefore letting Agent 4 collect the Sardinium and the Zapfish, allowing them to complete the mission.

In the Octo Expansion, the Octo Samurai returns in Whack-Fu Station. He has all the same moves he had with his fight with Agent 4, but this time tries to knock Agent 8 (who is in a Baller) off the platform instead of splatting them directly. After the Octocycle's tentacle has been splatted three times, it explodes, with the Octo Samurai once again defeated.