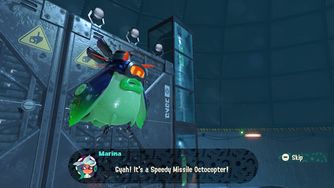 Tenta Missiles, much like the Missile Octocopter, but also has two thrusters on each side of its helmet, allowing it to quickly dodge left or right, similar to a player performing a dualie dodge. Unlike other Octarians with dodge capabilities such as the Deluxe Octocopter, Speedy Missile Octocopters dodge much more frequently, often performing two dodges in a row to displace themselves farther away from the player's line of fire than other dodge-capable enemies.