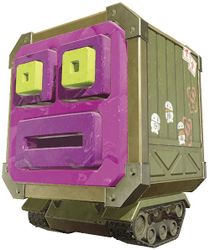 Octostamp DXs are machines created by the Octarians in Splatoon 2's single-player modes, Octo Canyon and the Octo Expansion.

Octostamp DXs are like Octostamps, but they are much larger, although not as large as the Octostomp. They use tank treads to get around, and their faces are made of cubes, giving the machines a pixelated look. However, their faces are fully articulated, as they can express emotions, such as being confused when a player is hiding. They are some of the rarest enemies in the game, only appearing in a few levels. They are also adorned with various graffiti and stickers. Some Sanitized Octostamp DXs have additional faces connected to them which lack the glowing eyes and yellow faces that the main face, which controls all of the machine's movement, has.

Octostamp DXs behave similarly to Octostamps, but they are much slower. The only real difference between it and Octostamps in their attack behavior is that the Octostamp DX does not jump to attack the player and will instead fall forwards into the ground. Octostamp DXs are indestructible. Occasionally they have an objective on them such as a key or a launchpad, so the player might be required to climb up them. Octostamp DXs will notice if Agent 4 or Agent 8 attempts to ink their sides whilst they are upright. When an Octostamp DX attacks, it may accidentally crush other Octarians in the process, and it is also one of the only things capable of destroying a Bumper.