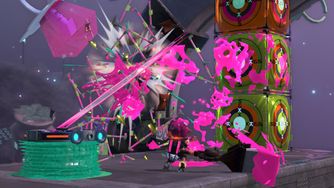 Octowashers are an enemy in the Octo Expansion. They are Octarian machines, composed of two circular fans placed horizontally one over the other, with a spinning torrent of ink between them. The top fan has two lamps that serve as the Octowasher's eyes, similar to Flooders. It should be noted that stationary Octowashers dimly flash orange while moving ones flash yellow. Just like a Flooder, they are completely invincible.

Octowashers are usually found on ride rails and most of them are stationary, though a few move along the rail towards Agent 8. Touching them immediately breaks Agent 8's current armor or splats them if they are in recovery mode, and also knocks them off any ride rails they are on (usually causing a splat from the resulting fall).