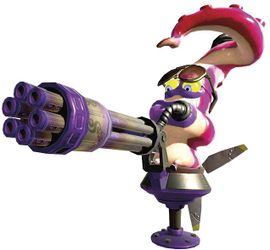 Octocommanders are a type of Octarian enemy in Octo Canyon, the Octo Expansion, and Return of the Mammalians. They resemble Octosnipers but wear sunglasses and attack using a splatling rather than a charger.

Octocommanders look extremely similar to Octosnipers, but they wear a beret and a pair of aviators. They also have fat, purple lips. They are stationed on a platform with a propeller on the back, and the platform can rotate 360 degrees. Their splatling gun has six barrels and Octarian designs on the large cylindrical part. Like Octosnipers, they have small, stubby legs.

Octocommanders, like Octosnipers, are stationary, but instead of a charger, Octocommanders use a splatling that initially fires a few shots but rapidly increases its fire rate as it shoots. The splatling has a very high rate of fire when it is shooting at full speed, but the Octocommanders take a break each time they finish firing it to catch their breath, giving the player a chance to safely splat them.