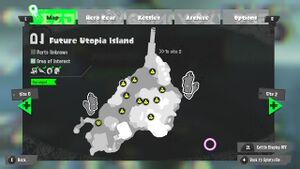 Future Utopia Island is the first site of Splatoon 3's single-player campaign, Return of the Mammalians, though more specifically, Alterna. It includes ten kettles, the Squid Sisters Camp and a kettle to return to Splatsville. There is also a Zapfish doll which can be used to return to the Crater. After Mr. Grizz has been defeated, a wooden statue of him can be found, which can be used to refight him or watch the credits. The site also hosts the secret final level: After Alterna, which is located on the bottom-left peninsula where the player first enters Alterna. Unlike all other kettles, it is not visible on the map even after being unlocked.

Sardinium returns in Splatoon 3. There are three pieces of Sardinium hidden on the map. One is located on the central hill of the island. Another is hidden on the southeast cliff. The last one can be found underneath Fuzzballs to the north of the map. These can be used to upgrade Agent 3's skills.

Sunken Scrolls return in Splatoon 3. There are four Sunken Scrolls that can be found on the island. The first is located to the north of the island, where the player has to pop blue balloons to gain access to the scroll.