Sturgeon Shipyard is a multiplayer stage in Splatoon 2 and Splatoon 3. The entire stage is a ship being built inside a shipyard. Drawbridges around the stage are periodically raised and lowered, modifying the players' navigation options.

Sturgeon Shipyard contains many low areas surrounded by high perches, featuring a few bridges which open and close between a vertical and horizontal position during a battle. Sturgeon Shipyard has four platforms that rise and fall throughout a match, starting in an upright position. Two are located immediately in front of the spawn point and two are located at opposing ends of the central area. The position of these platforms can create different advantages throughout a match, such as the central ones allowing access to the opponent's vantage point. They are closer to each team's base, which is comprised of two layers. To reach the opposing team's spawn, one must travel across the entirety of the middle level from right to left.

Going from the spawn point, there is a small hallway to the left which drops off in a lower area to the side of the stage. The exterior of the center of the stage contains raised areas which can function as vantage points overlooking the central bridge in the center. There is also an area underneath the central bridge which is uninkable but can allow for some sneaky movements below the typical combat areas.

The zone covers the center bridge and the ramps leading up to it. Two new blocks facing perpendicular to the zone's length are added to help control the zone easier. Other than that, no changes have been made in this mode.

The Tower is located on top of the center bridge. When taking the Tower, it travels right, then moves down towards enemy territory. It then continues to move up the ramp and into the middle layer, where it reaches its goal halfway through the area. Spawn points have been moved to a raised area to create distance between the spawn and the goal. A ramp is added left of spawn, as well as an inkable wall and block, and the sponge has been switched out for a sponge of the opposing team's color, making it easier to get into enemy territory.

The Rainmaker is located in the center of the stage, on top of the bridge. The goals are near where the spawn points normally sit, closer to the ramps, with the spawn point now on a new platform further back. The map is the same as Tower Control but has an extra ramp near spawn and a new inkable block that allows access to the area of the drawbridges near spawn and creates a new route to the left.

The baskets are located in the bottom section of each base, against the middle of the wall away from the center of the stage, with the bump on the ground next to the ramp leading up. The layout is the same as Tower Control, minus the ramps, the block near the ramp, and removing the sponge entirely. 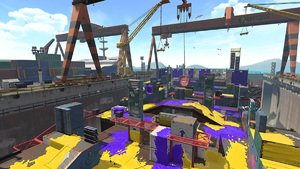 Sturgeon Shipyard was released with the launch of Splatoon 2. 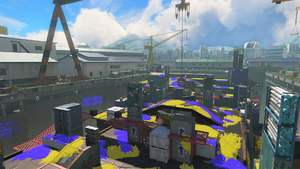 Sturgeon Shipyard returns in Splatoon 3. The central section of the stage remains entirely unchanged, however, the spawn area is an extra platform for the Spawner drones to send players at, above the spawn of Splatoon 2. During certain ranked modes, the moving platforms move depending on the location of the objective. It is also one of the stages that can have Tricolor Turf Wars, in which the spawn areas have been largely decreased and two extra areas are added on each side of the center, for the defending team to spawn in.

Sturgeon Shipyard was available in the following Splatfests as the Tricolor Turf War stage in Splatoon 3: