The Splat in our Zones

Splatoon 2​
The Splat in our Zones 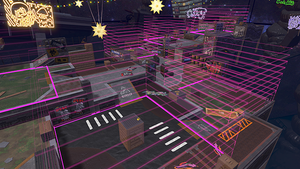 The Splat in our Zones is a multiplayer stage in Splatoon 2. It was the nineteenth variation of Shifty Station, and first appeared in the Boke vs. Tsukkomi and Pancake vs. Waffle Splatfests. It returned in the Chaos vs. Order Splatfest. As of version 5.0.0, it is exclusively available in Private Battles. It features six "free Splat Zones", which operate like Splat Zones in the sense that once a certain amount is inked, the entire zone will fill with the team's ink.

The Spawn Points are located on opposite ends of the stage and are not accessible. Immediately down a layer is a Splat Zone. A Bumper is located in that zone. to the right is an area with a sponge on the wall. Straight down is an open area and to the right is another Splat Zone. The Splat Zone has an Inkable wall that is climbable but not inkable on the top. A sponge is located behind the Splat Zone. to get onto the other area. Down is another Splat Zone that has a fully uninkable box. In the middle there are uninkable objects for protection and a inkable wall that can be climbed to get into the team's open area, making it easier for base invading.

The Splat in our Zones is named after The Fault in Our Stars, a novel by John Green. The name refers to the six free Splat Zones placed around the stage.