Snapper Canal is a multiplayer stage in Splatoon 2. It is an urban river canal running under a train bridge.

The defining features of the stage are the two large sloped surfaces that descend from the outer portion of the stage to the lower area near the water. The spawn points are located on elevated platforms that protrude outwards, allowing players to access the right side of the stage easily. Immediately in front, there is a small flat area before the canal descends to the lower point. Players can, however, take a corridor to the left which gets them to the other side of a wall and the other side of the slope. To the far sides of the stage, the lowest flat areas can be found with some obstacles and a ramp only accessible from the lower area. The center of the stage has a large lone barricade. The wall can be inked but the top of it is uninkable.

The Splat Zone is located at the very center of the stage, on the low area with the barricade. The stage is completely unchanged in this mode.

The Tower is located at the center of the stage in place of the barricade. The Tower retreats towards the riders' side and goes left before going forwards over the water, towards the enemy base, and reaches its final destination on the flat area at the top of the slope in front of their base. Spawns have slightly been pushed closer to the center of the map and the goal, Inkrails have been added in front of the spawn point to facilitate getting into the fight faster. Ramps and blocks have been added throughout the map to reach certain areas faster. The walls near the canal have been replaced with smaller walls, and a new block has been added next to the canal to make map control easier.

The Rainmaker is located on top of the barricade at the center of the stage. The goal is located where each team's spawn point would usually be, with ramps having been added to facilitate this. The spawn points have been moved one layer upon a newly added platform. Players can take a more direct approach to the area, can access some newly added inkable walls up the left side of the stage, or infiltrate from the right side.

The baskets are located in the flat area in front of the spawn. Spawns are moved to a higher level to create distance between the basket and spawn. An Inkrail that goes over the water canal has been added, designed to be another path to reach the opposing team's basket. Other than that, the layout has been unchanged. 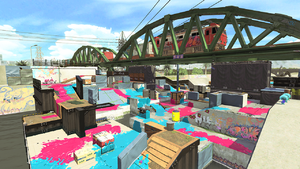