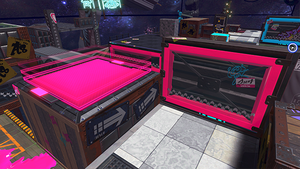 The Switches is a multiplayer stage in Splatoon 2. It was the thirteenth variation of Shifty Station, and first appeared in the Mushroom Mountain vs. Bamboo Shoot Village, Adventure vs. Relax, and Fork vs. Spoon Splatfests. It returned in the Chaos vs. Order Splatfest. As of version 5.0.0, it is exclusively available in Private Battles. Its main gimmick is Splat-Switches that move gates around the stage.

This stage's main mechanic revolves around Splat-Switches. There are two switches on each team's side which begin in the enemy's color, and one in the center which begins in a neutral state. The two switches in each team's side control a gate, moving it to a closed position when in the defending team's color, and the central switch controls two platforms in the central area - when it is inked, the platform closer to the owner's color will rise from ground level, making it inaccessible since its walls are uninkable.

Each team's spawn point is on a raised platform with a small walkway leading forward. To the right are two lower-leveled areas with staircases leading between them. The lowest of these two levels is split by a wall. The first Splat-Switch is in front of this wall, and the gate it controls is in its middle. Ahead of these two areas is a long wall separating them from the center of the stage. The second Splat-Switch is on top of this wall, and the gate it controls is adjacent to it (so that when the gate opens it hides the Splat-Switch from the center). To the left is some grating leading to the center from a different angle. The center area is a large, flat, open area, with the central Splat-Switch in its epicenter, with small boxes usable for cover on either side. On each team's right side is a sponge. On the left side is the rising platform, with another small box on top. When the moving platform is raised, it is leveled with the wall on the closer side, allowing players on it to access the base even without opening the gate.

The Switches is named after the book The Witches by Roald Dahl.