Piranha Pit has two defining gameplay features, being wider than it is long and having conveyor belts that move in most modes.

The stage itself consists of the spawn areas, the center, and the side areas. The right side leads to a pathway that drops down three levels before reaching the center, further right leads to a platform that leads to a smaller section with a ramp and a path leading to the center. The front of the spawn point drops down, with a conveyor belt leading directly to the center. The left has a tower that can be walked up via a slope, leading to a grated section. Further left leads to a small inkable platform that leads to the conveyor belt going to the side areas. The side area is a large platform, with a path wrapping the side of the map that leads up to the center using two conveyor belts. The center of the map contains two conveyor belts, separated by a divider, two alleys, and two small areas to the side. This is commonly the area in which most fighting takes place, as players must go through here to reach the opposing team's side camp. There is water surrounding the stage as a hazard for players who fall in.

In Splatoon 2, the center conveyor belts no longer touch and there is inkable space between them, with the wall separating them being removed entirely. Sponges have been added at the end of the conveyor belts that are in front of the spawn. Also, small amounts of turf in the side areas have been removed.

Piranha Pit has two Splat Zones each located in the open space immediately in front of each team's spawn point by the central conveyor belt ramps. The only way to get between the zones on ground level is through the small alleys in the center. However, from spawn or with the use of the conveyor belt ramps, players can take the slightly higher ground and have a little more freedom in how to infiltrate the opposite zone. The two conveyor belts in the side camps have also been disabled.

The Tower is located at the center of the stage between the two conveyor belt ramps where a wall would normally be. The Tower first moves towards the player's side before moving through the ground level alley to the enemy's half of the stage. From there, it travels to the edge of the middle ground before making a U-turn and reaching its goal.

The spawn point in Rainmaker is moved towards the left, next to the tower in front of the team's normal spawn position. The Rainmaker is located at the center of the stage between the two conveyor belt ramps where a wall would normally be. The Rainmaker must be taken to a goal on the far opposite side of the stage on the small island in the side camp. Many of the conveyor belts do not function in this mode, except for the ramps in the center and the ones next to each goal. Lots of boxes have been added over holes to aid in attacking the enemy team.

In Splatoon 2, the layout of Piranha Pit is changed significantly during Rainmaker. Two entirely new elevated structures only accessible from two new conveyor belt ramps have been added on top of the normally lower area. The first conveyer belt moves down while the second one goes up making it easier to get the pedestal. Spawn points are moved on top of these platforms, as well as the goal immediately in front of the spawns. The Rainmaker is located on an uninkable block at the center of the map and the conveyor belt ramps located around it must be used to grab it. All the flat conveyor belts do not function while the conveyor belt ramps are still functional. Inkrails are added to the right to get to the area of the first conveyer belt. 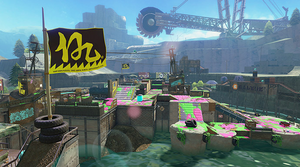 Piranha Pit was available in the following Splatfests in Splatoon: 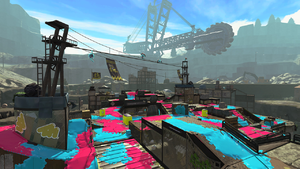 The return of Piranha Pit in Splatoon 2 was announced on 8 March 2018 in the Nintendo Direct, along with Camp Triggerfish and the introduction of Wahoo World.[3] 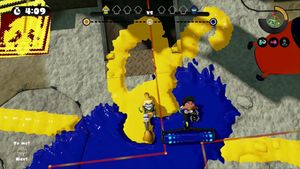 Boneless Inklings with their roller-type weapons. 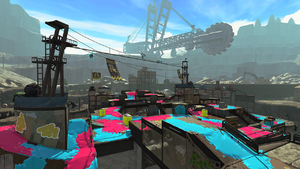 Piranha Pit without the conveyor belts.

Post behind Spawn Point that has weapons from the first game.