New Albacore Hotel is a multiplayer stage in Splatoon 2. It is designed after a rooftop pool on top of a hotel. It is a large and open stage, with the pool serving as an obstacle when moving to the stage's center.

The stage is divided into three transverse bands of roughly equal width, divided by water channels. Over each channel are three bridges (two in Turf War and Splat Zones): a raised grate on the left flank, a ground-level grate in the middle (missing in Turf War and Splat Zones), and a solid ground bridge on the right. There are walls and smaller obstacles strewn around the bridges. Each team's spawn point is on a raised cliff behind and to the right of the nearest band, led up to by a uninkable crisscross ramp. The spawn point's platform has a ramp leading up to it in certain modes. To the left of the spawn point is a small pathway encircling a smaller water pit. Overall, the stage is very wide and fairly flat.

New Albacore Hotel is a series of wooden-decked platforms rising from the titular hotel's rooftop pool. The left flank of each of the two external bands has a pool ladder leading up from the water. The central band is an artificial beach with sand topping the platforms. The raised platforms near the spawn points have a few small lawns with green grass. The uninkable platforms leading up to the spawn area are glass panes covering a water garden with large waterlilies. Behind each spawn point are the hotel's two dining halls, and to the left and right of the stage are large floating pavilions filled with jellyfish hotel guests. The various water channels and pits are all parts of the pool and feature jellyfish swimming or using water mattresses and swim rings. The raised areas near the spawn points include a small coffee counter behind glass walls and the raised areas near the middle have a covered lifeguard station. The obstacles in the stage vary between wooden boxes made from the same decking as the floor, glass boxes filled with beach balls, water mattresses in upright holders, lockers, safes, and walls with video screens showing adverts for the hotel. The floor, especially in the central band, is littered with deflated swim rings, serving trays with cocktails, beach towels, and lost or forgotten wristwatches.

There is a single zone in the middle of the stage, filling the middle third of the central band. It takes up most of the area between the ramps. A ramp is added next to the block where the player can jump to the zone, and an Inkrail is added to the right, next to the grates to the opponent's base.

The Tower starts on an added ramp in between the two middle grates. The Tower travels left towards the opposing side of the stage before moving forwards and spanning over the water. It travels over the water for almost the entirety of the stage before once again snaking forwards and reaching the end goal, which is in the drop-off in front of the enemy base.

The Rainmaker is located on top of the raised block at the center of the stage. The goals are immediately after the drop-off from each team's spawn point. Three main paths can be taken to reach the goal. After obtaining the Rainmaker, if the player goes into the opponent's side from the right, they reach an intersection where they can either keep going forwards or to the left. Going forwards leads to a narrow ramp up to the same level as the goal. Going left leads to an uninkable ramp which leads directly to the goal, although the uninkable ramp turns into a step that must then be jumped. If the player goes left from the Rainmaker's starting point, they can go up a ramp which drops down to the uninkable ramp from the other path or jump from the block added to a higher platform to then jump onto the pedestal.

The first thirty clams on the map are distributed all along each of the three bands, with later clams spawning mostly on the center band. 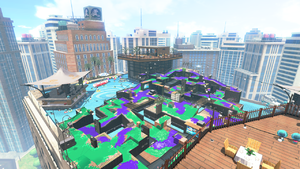