Furler in the Ashes

Splatoon 2​
Furler in the Ashes 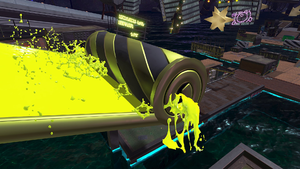 Furler in the Ashes is a multiplayer stage in Splatoon 2. It was the twenty-third variation of Shifty Station, and first appeared in the Unicorn vs. Narwhal, No Pineapple vs. Pineapple, and Kid vs. Grown-Up Splatfests. It returned in the Chaos vs. Order Splatfest. As of version 5.0.0, it is exclusively available in Private Battles. The stage features large Inkfurlers which can be used to traverse across the stage, and after ninety seconds, the water level will drop in a similar fashion to Mahi-Mahi Resort.

After the water level drops, the middle Inkfurlers are raised and the center platform can now be accessed. The island with the inkfurler is expanded with more turf. The area around it lowers, making access to the enemy base harder. An area to the left is now revealed, near the Inkfurler that acts like a wall.

It is named after An Ember in the Ashes, a novel by Sabaa Tahir.