Kelp Dome is a greenhouse-themed multiplayer stage in Splatoon and Splatoon 2.

Kelp Dome is shaped like a large square with rounded edges. It includes a variety of paths and ramps divided by uninkable glass containers, in which various plants grow. A network of grated walkways are also found above the central area and some of its connecting paths, allowing players to ink turf from above. On the ceiling, there is a glass dome that covers the entire round garden.

Unlike conventional stages like Urchin Underpass and Walleye Warehouse, which have both team's bases at far ends of the stage and players clashing at the midpoint, Kelp Dome is shaped more like a donut. The spawn points are situated on the outer rims, which also envelop the central area. They are located on very high pillars with a large grate extending out from them, and there is a large raised area that players can only reach by dropping down from the spawn point. The large raised area is therefore not accessible to the enemy team. Two paths lead away from the spawn point, one to the left and one to the right, while in Ranked Battle modes there is also a third, direct path leading to the central area through a newly-added metal box. The area behind the spawn point also has a ramp that leads out into the left path.

Going down the left route is a small, square area, with a narrow opening leading into the neutral combat area and a ramp going over the wall and on to the map's network of grates. On the right is an enclosed area with two ramps leading out of it. One connects to the grate passages directly above the central area, while the other is a one-way drop into the corner regions. These two corner regions are where players of both teams meet when they leave their bases without using the grates. It is a simple square area with some simple cover and an inkable wall that allows squids and octopuses to swim up on to the grate network. There is also a wide path leading into the middle region. The grate runs above this path, branching off into either team's inner base.

At the center is a wide-open area that is broken into halves by a tall cylinder in the middle, with two arms extending out from it. The entire structure can be inked so that players can get on to the platform from below. It is also where the grates on either side of the map end, making it yet another way to reach them. Two bumpers are placed in either corner of the area for cover. There is no water, nor an abyss, in this stage.

The zone is located at the center of the map, surrounding the tall cylinder, and is in the shape of a square. To capture the zone, both the parts on top of and below the tall cylinder must be inked. An inkable block with a ramp has been added just ahead of the spawn point, allowing players to get over the otherwise uninkable glass containers for a shortcut into the center area. In Splatoon 2, inkable blocks are added to the left of the spawn point, near the grate network, to get over the uninkable glass containers towards the corner of the dome.

In Splatoon, the Tower starts on top of the tall cylinder at the center of the map. It moves down and to the right of the tall cylinder, towards the corner of the dome. It then goes straight towards the opposing team's spawn point and finishes right below the inaccessible area of the opposing team. An inkable block with a ramp has been added from the left of the spawn point to get over the uninkable glass containers for a shortcut into the center area. Many small objects in the corners of the dome got removed to make way for the path of the tower.

In Splatoon 2, the left side of spawn has significantly changed. There is more land on the spawn platform, near the goal, and a new block that can be used as a vantage point. Some of the containers have been moved to allow for easier mobility, more blocks have been added on the grates, and the left side has a bump. A block has been added near the center for cover. Checkpoints were also added:

The Rainmaker starts on top of the tall cylinder at the center of the map. The goal is located in front of the spawn point of the opposing team next to the wall. Bumpers have been added onto the raised walkways so that players cannot take that walkway right after obtaining the Rainmaker, or attack the opposing team before getting the weapon. Inkable blocks have been added to the left of the spawn point near the grate network to get over the uninkable glass containers towards the corner of the dome. Barriers were also added near the spawn point for cover, but got removed in Splatoon 2. Also in Splatoon 2, the left side has been slightly expanded.

The left side of the map is changed. The ramps are flatter, contain inkable surfaces in front of the containers, and a ramp ahead of it. The basket is located on the new inkable surfaces that is in front of the containers. This map also has 2 bumps: one on the left and one on the right. The object placement on the grates are different, and besides that and the absence of the inkable block and ramp in front of spawn, the layout is the same as Tower Control. 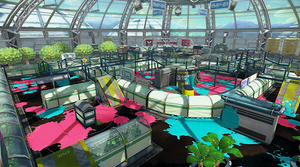 Kelp Dome was released on 11 June 2015 at 02:00 UTC.[1] A modified version of Kelp Dome is playable in Octoling Invasion, an Octo Valley mission.

Kelp Dome was available in the following Splatfests in Splatoon:

Kelp Dome appears relatively unchanged to its appearance in Splatoon, but some changes made include expansions to the grated walkways to the side of the stage, a ramp in front of the base, and some small boxes added as obstacles.

Kelp Dome underwent renovation, with small changes in each mode to prevent camping.

Kelp Dome is derived from the nouns 'kelp' and 'dome'. Kelp is a large brown algae seaweed and a dome is an architectural element that resembles the hollow upper half of a sphere.

モズク農園 Mozuku Nōen is derived from 'Mozuku' and 'plantation'. Mozuku is a type of edible seaweed and a plantation is a field to grow crops.