Flounder Heights is a multiplayer stage in Splatoon and Splatoon 3. It is a map set on an apartment complex with many high vantage points and low, corner-based areas. It is a vertical stage with many inkable walls, allowing for several navigation options.

The center of Flounder Heights contains two towers connected by a grated bridge. This is where most fighting occurs, as the only way to get to the other side of the map is by going over the towers or through the alley beneath the bridge. Two alleys separate each team's base from the central towers, which each consist of one tree for cover. The bases in Flounder Heights resemble the starting areas in Saltspray Rig; the other team cannot reach the higher part of the plaza, and there are four ways of exiting into the low alleys. On both sides of the stage is a map that shows the layout of ink on the stage from a top-down perspective. However, the

This stage includes two Splat Zones. Each zone is located on one of the two roofs of the central towers. The high ground is the main battlefield of this mode and using the buildings' walls can make for great access to either zone.

The Rainmaker in Flounder Heights is located on top of the grated bridge in the center of the map. The goal is located outside of the opposing team's base in the sandlot below the spawn point. Three stacks of boxes have been added to help the attacking team get inside the enemy team's starting plaza. 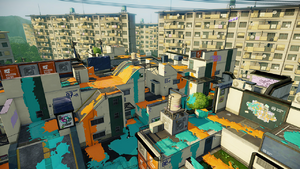 Flounder Heights was revealed during a Japanese promotional trailer depicting new updates on 24 July 2015. It was released on 20 August 2015.

Flounder Heights was available in the following Splatfests in Splatoon: 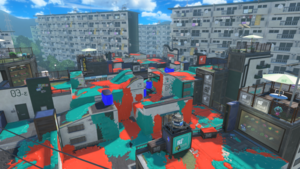 Flounder Heights was announced to return in the 10 August 2022 Nintendo Direct and arrived in the game at the start of Chill Season 2022. The complex has been redeveloped in collaboration with the local government and industry academics, "going greener" in the process.[1] The stage's overall elevation was lowered, allowing for easier movement across the stage. The spawn region was also overhauled, being made much larger and more open. The walls near the Splat Zones are also no longer climbable, and the grated walkway was mostly removed.