The Spirit Lifter is a rocket that appears in Splatoon 3's story mode, Return of the Mammalians.

The Spirit Lifter is located in the center of Alterna, next to the Alterna Space Center. Initially, the rocket and the Space Center are inaccessible due to the large amount of Fuzzy Ooze that surrounds them. In the final sequence, Agent 3 and the other members of the New Squidbeak Splatoon construct a lawnmower-like tool from treasure they collected which is able to shave off the fuzz, allowing for them to infiltrate the structure. 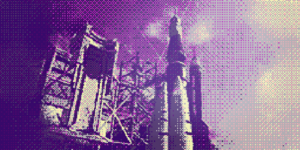 The Spirit Lifter is filled with Fuzzy Ooze, which Mr. Grizz plans to use to cover the entirety of Earth; this is the only time Fuzzy Ooze appears outside of Alterna's main areas. The Great Zapfish can also be seen captured in a central tube inside the steerage, which is used to power the rocket for its eventual use. After being fought and defeated on the rocket, Mr. Grizz explodes, presumably destroying the rocket.

After the story is completed, The Spirit Lifter is replaced with a near-identical rocket, albeit colored blue rather than orange. In one of Agent 1's lines of dialogue, she expresses surprise at the presence of another rocket. The name and origin of this second rocket are unknown.

In the Alterna Logs, it is mentioned that The Spirit Lifter was initially created because the youngest generation of human scientists in Alterna grew restless seeing the fake sky made out of liquid crystals, and believed they deserved to see the real sky on the surface. When the boosters were ignited for the first time during a launch test, the energy from them overloaded the liquid crystals, causing the crystal walls to shatter and rain debris upon the remains of humanity, leaving no survivors and ultimately rendering the species completely extinct.