The spawn points are located on inaccessible points of the stage which allow a fairly wide window to access the battleground. Following the track to the right leads to a drop-off and a raised ramp which allows players to attack from behind cover, and continuing to follow the track leads into the enemy's side. Following the track to the left accesses the opponent's primary access point to the other team's side.

The Tower is located at the center of the stage on top of the hump. The Tower moves at an angle, left down the hump before traveling through the alley, then going up into the enemy base where it reaches its goal. Blocks to the side of the stage make access to the opposing team's side harder. Inkrails have been added to get the tower quicker. A block has been added near the second checkpoint, and ramps have been added to connect the center hump to the bike track. Blocks have also been added near the walls right of spawn to provide a vantage point.

The basket on this stage is located at opposing ends of the central area, making access to the basket fairly easy. The layout in this mode is exactly the same as Rainmaker. 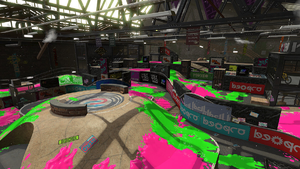