The Reef is a multiplayer stage in Splatoon 2.

The Reef is located a few blocks from Inkopolis Square and is a popular area to hang out when it is not being used for Turf War. The Reef is home to some of the most popular boutique shops in the city.

The Reef overview prior to its renovations.

The Reef features many wide-open areas with separate high and low levels. This creates many flanking paths around many of its key areas. The spawn point is not accessible to the enemy team and includes a path which allows easy access to the far left and right sides of the map. Dropping from the base is a small square raised area that leads into the main area of the stage. Notably, there is a stone bridge at the center of the stage which acts as a straight path into the enemy area. The stage also boasts a large grass lot below the bridge, with a tree and a block as obstacles. The area underneath the bridge indents downwards and the turf is inkable.

The Reef is a plaza that is built below ground, surrounded with shops. The walls of the stage are large windows displaying various goods. Many tarp posters with various advertisements and graffiti cover the walls and windows. The floor is made of concrete and mason pathways with the side areas painted as a parking lot, along with a car on each side. Fence gates with barbed wire on top are lined against walls in some areas. Vending machines, skateboards, and bikes line the walls near the spawn points. At the sides are cafés and bars with jellyfish serving inside. On the top of walls there are various potted plants and the center of the stage includes patches of grass with trees and a large stone bridge crossing over. Various light posts with banners are strewn across the stage. A large pool of water is found below the left path from the spawn point. Outside of the playable area are trees planted on the sidewalk and skyscrapers of various colors and patterns. The Ferris wheel from Wahoo World can be seen behind Team Bravo's spawn.

In Splat Zones, the zone can be found below the bridge separated by a bumper. Boxes have been added around the bridge to help teams attack players on the bridge and gain control of it and the zones.

Version 4.2.0 and onwards now has two Splat Zones, both under the bridge. The spawn points are moved to the left and down a layer to get to the zones faster. The block next to the bridge is moved further from the bridge to allow a way to invade the other team's base.

The Tower initially starts below the bridge. When advancing, the Tower goes left and retreats to the player's side, going around the tree before advancing back towards the enemy base. It then travels up the ramp and up into the small square lot in front of the enemy base, where it reaches its goal.

Before Version 4.2.0, like the Tower in Tower Control, the Rainmaker started below the bridge in the center of The Reef. Each goal was located next to the car in each base. Several ramps have been added that give each team access to the other team's base.

Version 4.2.0 and onwards start the Rainmaker on top of the bridge. The goal is now on the layer below the spawn point. The sponge in Turf War has been replaced with a ramp, and an uninkable ramp has been added to the stage, as avenues to the pedestal.

Before Version 4.2.0 the basket was located below the inaccessible area of the base and there were no bumps near it. There is a new block on the right side of the bridge to get above the wall.

In Version 4.2.0 and onwards, the Clam basket has been moved to the same layer as the parked car. Ramps have been added to get to the clam basket, and the sponge has been removed. A bump has been added to help score with power clams. 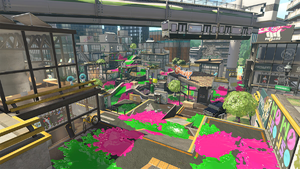 The Reef was released with launch of Splatoon 2.

Mission nine of Octo Canyon, Octoling Strike, takes place on a modified layout of the release version of The Reef. This layout remained the same after the release of the updated version in Version 4.2.0. 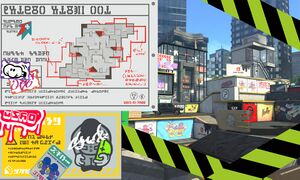 The image released on social media announcing changes to The Reef.

On 31 October 2018, an announcement was posted on the official Splatoon Japanese Twitter account stating that from 1 November 2018 until the release of Version 4.2.0 on 7 November 2018, The Reef would be "closed for renovations", similar to the announcement made for Starfish Mainstage in Version 4.0.0. The announcement included a blueprint of the stage with the planned changes scribbled on it.

A reef is a habitat for animals and land-dwelling organisms, a popular area that attracts a diverse assemblage of organisms, especially algae and fish. In Splatoon 2, The Reef is a popular area for Inklings to hang out when it is not being used for Turf War and home to some of the most popular boutique shops in the city.