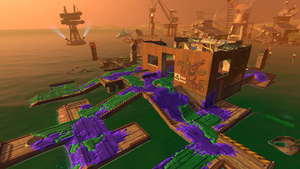 Lost Outpost features a walled-off building surrounded by various docks and pillars. Directly in front of the building lies a completely netted area. To the right is an uneven slope down to the water. To the left, are three varying docks. During low tide, another dock behind the building is revealed, consisting of various walkways and grated paths.